[Lillian Daniel] Spiritual but Not Religious? Please Talk to my Friend Amy Laura.

Recently, Russell Johnson and I edited an impromptu festschrift for Dr. Hall.  One of the most amusing contributions came from Lillian Daniel, who also happened to be this year’s preacher for Convocation and Pastors’ School at Duke Divinity School.  We offer it here as a special Fall Break treat for our readers.

On August 31, 2011, the author published a daily devotional on the ucc.org website, “Spiritual but Not Religious? Please Stop Boring Me.”  Several weeks of intense prayer and meditation on readers’ comments followed:

Why is a minister expressing frustration with folks who choose not to attend a church?  This is not the work of Jesus, is it?  I’m offended.  I do not feel embraced or inspired. The tone was unnecessarily snarky.

In response to these thoughtful ecclesiological and Christological insights, she is working to change her ways.

“And I tell you that you are Amy Laura Hall, and on this rock I will build my church, and the gates of Hades will not overcome it.”

Reflection by Lillian Daniel
On airplanes, I dread the conversation with the person who finds out I am a minister and wants to use the flight time to explain to me that he is “spiritual but not religious.” Such a person will always share this as if it is some kind of daring insight, unique to him, bold in its rebellion against the religious status quo. Next thing you know, he’s telling me that he finds God in the sunsets.

That is why now, I travel everywhere with Amy Laura Hall, and ask her to sit next to these people instead.

Ever since we met in our first year at Yale Divinity School, I knew that Amy Laura was the right person to ask to sit next to anyone I did not want to sit next to. Mostly because she was willing to sit next to me.

We met when she had just received some devastating personal news, which I will now share with you. I do so because, apparently, I am not a very sensitive person, so I am working on my sharing. Amy Laura had just received what I believe was her first, and possibly her only, B.

Actually, back then at Yale they didn’t have B’s, or any normal grades for that matter. This was part of a compassionate effort to relieve the incredible pressure upon the professors of grading.

It was only a small opening assignment, but AL, as I call her, was inconsolable over her HP. Surrounded by nurturing and sympathetic women (oh, and I was there too) she was holding court from a faded chaise lounge in the only women’s bathroom on campus at that time. “I could have gone to *$%! #@! Law school,” I recall her saying.

At that point, and I will never forget it, Jesus, Moses and Isaiah all suddenly appeared above the paper towel dispenser, glowing, shining and wearing the same kind of sensible shoes that indicated that the three of them had been United Methodists all along.  Singing to the tune of a tuneless Wesleyan hymn, in three-part harmony, they prevailed upon Amy Laura to change her mind about law school. Delicately wiping her nose on the sleeve of her Laura Ashley dress, she rose to face another day, although at that time she told us:  “Tell no one.”

From that point on, AL took YDS by storm. But our friendship was not all the American dream. Our different moral and theological outlooks and our differing definitions of neighbor and family seriously tested it.

To offer an edifying ethical case study, imagine the following scenario at the divinity school coffee hour:  After hours of classes spent with people I do not know, I am focused entirely on getting my coffee and donut, and talking to my one friend. My one friend has a large sandwich board around her neck that says, “If you have any kind of problem in the world, come talk to me,” on one side, and on the other, “The Doctor is in.”

I have recently taken a bit of heat for responding to an airplane seatmate: “Thank you for sharing, spiritual but not religious sunset person. You are now comfortably in the norm for self-centered American culture, right smack in the bland majority of people who find ancient religions dull but find themselves uniquely fascinating.” Apparently, that comment left some under-cherished people feeling as if their feelings had been hurt.

Now as a Calvinist, I don’t see how I could have responded differently. But with respect to the Methodist tradition, and in an effort to be more cherishing toward the under-cherished, I will strive to improve myself by bringing Amy Laura with me on all future flights.

There, she will respond with the love, intelligence and compassion we all know her for. But just when the boring sunset person thinks he has found a kind and passive listening ear, Amy Laura will start talking.

And pulling out magazines. But there will be no Sudoku puzzles for the unsuspecting sunset guy on this flight. No, she will be exegeting Good Housekeeping and Glamour advertisements, holding forth on television shows she has never watched but nonetheless has strong opinions about, and showing him pictures of her kids.

Amy Laura, a committed vegetarian who could talk a dog off a meat wagon, will have him signed on to attend the next Methodist camp meeting by the end of the flight. Or earlier, if there is turbulence.

Which is to say, no matter how annoying the conversation partner is, Amy Laura will be that heady, hearty, quirky, talk-to-anyone, listen-to-anyone, prophetic, wholesome, edgy, spicy, brilliant spark of fire on earth that the world needs.

Dear God, thank you for creating Amy Laura in your image and not the other way around. Otherwise, I’m pretty sure we never would have gotten the Sabbath. Amen.

Lillian Daniel is the Senior Minister of the First Congregational Church, UCC, Glen Ellyn, Illinois, and personal shopper for Amy Laura Hall.   While she has never had Dr. Hall as a professor, over the course of their long friendship, she has benefitted from countless lectures on a wide range of topics. 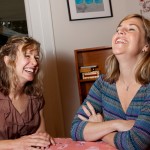