Is Fear Your God? 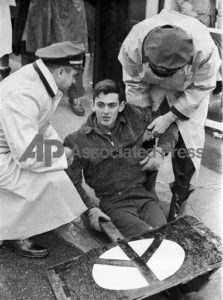 My daughter said something recently that made me stop, wipe my dish-watery hands off, and ask her permission to quote her. She said that CNN Student News, which she is told to watch every morning at school, is “all about war, and disease; and people are scared.”  She is a brave kid, not naturally prone to anxiety, but this barrage of “current events” has had her wondering whether the world is a mostly dangerous place.  She is noting how this ritual of sitting down to watch, over and over again, about death—destruction—plague, is shaping the imaginations of her peers.

I was a teenager during the Reagan era, and teens who were aware during that time were clear the adults in charge of the world were insane. We did not expect to live past thirty.  A wily political scientist may even today explain “Mutually Assured Destruction” sufficient to convince people around her of MAD’s wisdom, but teenagers who lived through it, and who were not susceptible to rhetorical manipulation, were clear this was a ludicrous way for human beings to exist.  We envisioned our lives under an umbrella of doom, one buffoon away from apocalypse.  I remember watching a videotape of the 1964 movie “Dr. Strangelove or: How I Learned to Stop Worrying and Love the Bomb” and thinking, “um, this is not helping.”  I did not laugh.  It was too real.

During this time, the horrors of Apartheid South Africa were finally making news in mainstream media, and so aware kids were supposed to find hope sufficient to fight for divestment, remaining aware that our own government was funding death squads in Central America and threatening our entire earth with death by nuclear apocalypse. I was fourteen when Prince’s “1999” came out, and he summed up perfectly the mood of many young people at that time.  We would be lucky to live seventeen more years to see thirty.  By high-school graduation, we had a whole new reason to be afraid, as HIV/AIDS made headlines daily, usually scapegoating our gay friends or making all of us afraid to kiss anyone.

So, I can sympathize with my daughter when she wonders whether the best way to be informed about the world is to be told over and over that people are being drowned, beheaded, poisoned and infected. And, by the way, all the polar bears are going to die and your grandchildren will know a world without frogs.  Apocalyptic thinking can effectively debilitate people.  It can lead to a kind of fear-induced despondency.  As Zack de la Rocha and Tom Morello of Rage Against the Machine named in their 1997 song “Vietnow,” “Shock around the clock, from noon ’til noon” can lead you to a place where “FEAR is your only god.”  The songwriters graciously suggest it may be better to turn off your radio (or CNN), rather than walking around in the world with a zombifying sense of terror.

Novelist and poet Margaret Atwood has written a riveting triptych of what she terms “speculative fiction,” describing life in and around an apocalypse. One of her heroines describes a feeling that I recognize in myself and others around me:

We’re using up the Earth. It’s almost gone. You can’t live with such fears and keep on whistling.  The waiting builds up in you like a tide.  You start wanting it to be done with.  You find yourself saying to the sky, Just do it. Do your worst. Get it over with.  She could feel the coming tremor of it running through her spine, asleep or awake.

Stop reading my words now, please, if you have not read Atwood’s novels and you do not want to know a central theme. The first of the three books ends asking whether human beings are more worth saving than killing.  The second of the three books ends with an annual feast of “Saint Julian and All Souls,” drawing on the visions of fourteenth-century writer Julian of Norwich, and Atwood there repeats the question.  I cannot spoil the final picture in Atwood’s triptych, because I have not finished it.  I am already missing the characters too much to turn pages quickly.

Atwood’s use of Mother Julian has me trying to stop implicitly weighing the evidence of hope against the data of despair. Forget neuroscience or phrenology or whatever else someone is telling you authoritatively about humanity.  There is no evidence people are more or less prone to incinerate ourselves in a climate apocalypse or a race war.  As Atwood writes, “What is our Cosmos but a snowflake? What is it but a piece of lace?”  To find that beauty, I must release my hold on what I usually think of as truth, and see the world askew.

* According to the AP Images site, from which I pulled this image, “In this Jan. 12, 1963 file photo, demonstrator Michael Kirby, 25, of Milton, Mass., carrying a peace sign, is taken into custody by police in Groton, Conn., outside the launching site of the Polaris nuclear missile submarine USS Nathan Hale. Kirby, a former nuclear weapons specialist in the Navy, was one of two pacifists arrested at the site.  Under the shadow of the Cold War’s threat of ‘mutually assured destruction,’ 1963 was the year of dawning arms control between the U.S. and the Soviet Union; they signed a Nuclear Test Ban Treaty.”