This essay originally appeared in the Durham Herald-Sun on Sunday, November 6, 2016 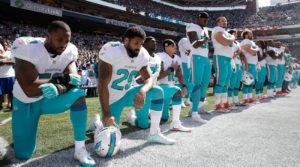 I listen to sports radio while running errands. This helps me follow what fans are being told to care about and what they are inculcated to talk about with one another.  This is how I recently came across Colin Cowherd.  Cowherd, the host of a Fox Radio show, was explaining Monday Night Football’s apparently suboptimal ratings.  By Cowherd’s reckoning, the NFL is punishing ESPN for periodically featuring journalism.  The NFL is delivering bad match-ups on Monday nights to try to bring ESPN to heel, Cowherd explained.  Cowherd was clear ESPN should know their place, and keep “promoting the brand” of the National Football League.  ESPN, by Cowherd’s analysis, had made a reckless decision by covering stories critical of the NFL.  Just before this analysis, Cowherd had told listeners that most people in the U.S. dislike an athlete named Colin Kaepernick.

Here is one story that ESPN risked to cover journalistically. On May 24, 2016, ESPN reported: “At least a half-dozen top NFL health officials waged an improper, behind-the-scenes campaign last year to influence a major U.S. government research study on football and brain disease, congressional investigators have concluded in a new report . . . the NFL pressured the National Institutes of Health” to defund a $16 million study, because the study “would be detrimental to the league’s image.”  ESPN concluded: “Taxpayers ended up bearing the cost instead.”  How dare ESPN cover a Congressional Report on the NFL, especially when Congress is supposed to be in gridlock?  (That was irony and a bad pun.)  Two Republican U.S. Senators from Arizona collaborated on another report, in 2015, on the NFL and the Department of Defense.  As ESPN reported: “the NFL received $7 million over three years from contracts.” Senator McCain “said he was ‘shocked and disappointed to learn that several NFL teams weren’t sponsoring these activities out of the goodness of their own hearts but were doing so to make an extra buck.’” Senator McCain noted that “the military faces cuts in spending” and that there is no reason to think (or studies to show) that displays of patriotism on the field will help recruiting. 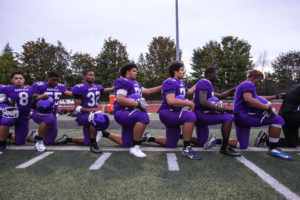 A friend told me I will “need a bigger paddle to stir this pot.” I do not have a big paddle, so I will now come at the National Anthem controversy by way of a Southern classic from 1974.  The first time I heard Kid Rock’s execrable cover of “Sweet Home Alabama” I threw up my hands, asking what this world is coming to. It seemed to me that Mr. Rock had trashed a good ballad.  Then I saw a documentary that interviews and features African-American women who served as back-up singers coterminous with the Southern Rock Era – women like Merry Clayton.  The film is called “20 Feet from Stardom.”  Merry Clayton there explains how she and Clydie King came to sing back-up on “Sweet Home Alabama.”  Clayton told Dorian Lynskey in a 2014 Guardian article:  “I said we’re going to sing the crap out of this song. They have the nerve to sing Sweet Home Alabama! That’s the white interpretation of Alabama. It’s not sweet home to black people! It’s not sweet home at all. We’re going to sing it like a protest song.” Clayton explained in 2013 to journalist Sam Adams for “A.V. Club” that hearing Neil Young’s 1970 song had hit a nerve with her, “I read the lyrics and it was during those terrible racial times . . . Dr. King had just been killed . . . it was a highly racial time, not just for black people, but for everybody in the world. We had the Vietnam War going on at the time; our boys were going to war and being killed.”  Clayton’s words helped me truly to hear lyrics I had allowed to wash over me. 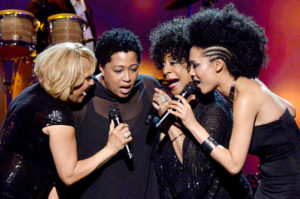 There is a reason why NFL players across the league are not standing up during the National Anthem. The rule stating that players will be on the field during the Anthem is new.  As Tom E. Curran of Comcast Sportsnet New England explained on ESPN, this requirement was started in 2009.  It is part of the very same military recruitment scheme that Senator McCain rebuked.  Men standing 2000 feet from stardom are being asked to stand and pretend like their friends are not concussive and their fathers and cousins have not been killed and traumatized over a lie about weapons of mass destruction.  Some people are so devoted to the idea that this country has lived only in valour and equality that we cannot move forward in truth.  I love football, and I love democracy.  Real journalism matters for both.  If you have been fuming over one young man’s courage to name that this country we love has problems, please ask more complicated questions about our history and about our present.