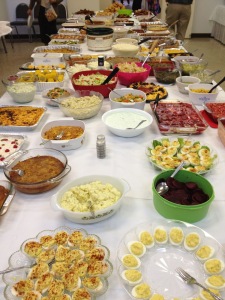 I’ve learned how to “tweet.” This involves putting words together to share, using 140 characters. One of my most “retweeted” “tweets” on the internet came out after a tragedy had everyone in panic mode. These were the words: “The world is transfixed by fear. Perfect love whispers in fear’s ear to turn his head toward hope.”

I was paraphrasing a fourteenth-century mystic, Julian of Norwich. I am writing a book about what her visions have taught me about fear. She is really in my head this week because, according to every news media outlet around us, we are supposed to be scared of one another. Restaurants, waiting rooms, and the pump at my gas station have news blaring: EBOLA! ISIS! Short of sleeping at the Eno River, you too will be exposed to the contagion of FEAR.

I recommend an antidote. But first, a history lesson. Julian of Norwich is the name given to the woman who wrote the first book written in English attributed to a woman. We don’t know what name “Julian of Norwich” answered to before she came to be called “Julian of Norwich.” We refer to her by that because, toward the end of her life, she was a resident wise woman in a church in Norwich, England that had long been called St. Julian’s. Sometime near the late fourteenth-century, this woman took the name of St. Julian’s church in Norwich. The church was bombed to oblivion by the German air force during WW II. But it was rebuilt for people who have the means to travel and love the writer known as Julian of Norwich. Tourists who don’t know a fig about the second century St. Julian go there because they think Mother Julian, from the fourteenth century, was holy. They go to see the apartment she lived in, adjacent to the place where people received Mass (the Lord’s Supper or Holy Communion) and feel close to her. 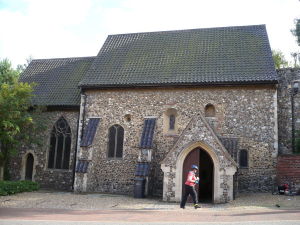 Norwich, England was a port city. In the fourteenth-century there were “sumptuary laws” in England. This meant that peasants, farmers, and other human beings without certifiably blue blood were forbidden to dress in a way that might allow them to pass above their station. As a port, Norwich had people coming in ships from Europe, dressed in ways that could not be easily sorted. Also, the official English church at this time distributed the Lord’s Supper, or Communion, according to rank and station. The first were to be first to the table, and the middle to be middle, and the last to be very, very last. If there was no more bread by then, so be it. Christianity, as it was practiced in the beautiful, fancy churches that people pay good money to see, was practiced during Julian of Norwich’s time to remind everyone to keep in their place. And, well . . . then there was The Plague. Thousands of people during this period were dying, horribly and suddenly. And they were dying “unshriven.” There were so few priests left alive in some areas to deliver the last rites to the dying that people were dying without being cared for to say confession and receive blessing. People left behind were stricken with fear that their husband, mother, or child was condemned to hell. 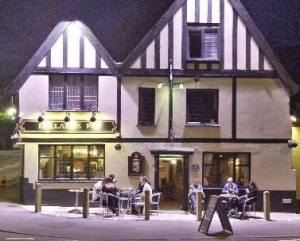 The Lollards’ Pit is now a pub.

Norwich also had what came to be known as “Lollard’s Pit,” a place where heretics were brought by the

church authorities to be burned alive. Fourteenth-century followers of a man named John Wycliffe, a group known pejoratively as “the Lollards,” were thrown in a pit and burned alive as examples of how not to think around the time that Julian of Norwich was bravely trying to write down what she had seen. The Lollards were in trouble for suggesting that regular people ought to be able to read the Bible. This was a dangerous suggestion. If regular people started reading the Bible themselves, they might believe they could think for themselves, without the strictly hierarchical authority of the feudal and church system. Wycliffe and his band of merry men and women had caught an idea that was irrepressible throughout early Christian history. No matter the chaos and rules around you, Jesus had given a new rule. Sit down and eat with your brothers and sisters. And, by the way, your brothers and sisters are those you most fear.

When Julian of Norwich wrote, people were dying by the thousands of disease. People were scared of newcomers, given that they could be carriers of disease, chaos, or heresy. And, Christians were being hanged for saying that Jesus did not care much for the stupid rank and file system. Her answer? Laugh at the devil. Look to Jesus. Keep hope. And don’t let fear be your new religion. 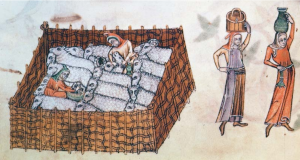 Pop! My dad had been called Reverend Hall, Dr. Hall, Father Hall, and occasionally “DAD!” but not Pop, until my Mom chose to go by Cookie. Pop goes with Cookie.

Want to know why my mom is called Cookie? I have a picture that I will eventually share of my dad, after my mom bought Rachel her first Mall Cookie Shop cookie. Rachel is sitting in Pop’s lap and looking really smug. Pop is also looking smug. They did it behind my back. My mom and my dad were right. Rachel deserved a huge cookie and icing sandwich thing, with no guilt. She deserved to be just smugly satisfied that they’d accomplished this without my knowing. That is what grandparents are supposed to do. So, Cookie became Cookie after that. Rachel knew who had just given her the best thing she’d ever had. Thank you, Pop and Cookie.

Pop also tried to understand me. I have told this story when teaching Christian Ethics 101. My dad told me, after having sat with me asking question after question for six months in his Confirmation Class, that if I did not understand everything, I should promise God that I would keep asking God good questions. Pop did not tell me that I would embarrass him if I did not conform in front of the congregation he was serving. He told me that I should see confirmation as a process. I think anyone teaching confirmation should take a hint from Pop.

Cookie and Pop taught me to understand Christians who do not always understand one another. My mother is so strong and smart she could have been the Governor of Texas. My father is so wise and kind he could have been a United Methodist Bishop.   I have just embarrassed them. But so be it. It is true. Neither one of them spent their time running for bishop or for governor. I am grateful. If they had been running for either, my girls and their cousins would not have seen them half as much. I am grateful Pop loved the people in his churches so much that he forgot to find time to run for bishop. He is the pastor I think of first when I tell my students that I want leaders whose gifts outstrip their ambition.

Pop hates to fly, but he is going to get on an airplane, again, to come see us this Thanksgiving. When I went off far away to college so long ago, I think we all knew it was going to be hard for me ever to move back to Texas. They have been patient with my wayward ways, and Pop evidently beams a little bit when he tells people back home I teach at Duke. He is a basketball fan. And he loves me.

Happy Birthday, our dear Pop, from all 3 of the Green Street Girls! We love you so much the 8 falls over! (That is our cute way of saying infinitely : )