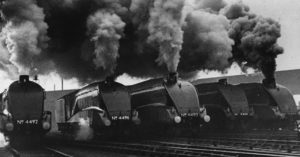 In late July, 2019, the Atlantic published an essay that was, well . . . silly. Jim Ayres has long been one of my go-to people for making sense out of nonsense. He has done that, reading closely the accompanying image for the Atlantic essay. Enjoy.

This picture of the locomotives demonstrates the weakness of the underlying thesis of the article.

Progress occurs when a new thing is imagined, is tested and refined, and then adopted by the people in general.  The requirements for progress are dissatisfaction with the status quo, sufficient knowledge of the mechanics of the point of the dissatisfaction, a reservoir of determination and curiosity, resources sufficient to address the issue, willingness to challenge old knowledge and gather new knowledge, and the freedom to act, and finally the hope of a reward.

Progress has been uneven through history because the requirements listed in the above paragraph occur in a chaotic pattern through time with no reliable way to achieve them concurrently. Except in the case of war, governments can do little to CREATE the needed concurrency.

Considering only the technological/scientific discovery of the last millennium, the reality of these requirements for progress and the chaotic/concurrency can be shown. I submit these two examples for consideration –

1. The horse collar (don’t laugh, it changed the world) was created to facilitate the movement of goods through the Middle East and especially Europe. The best draft horses were made weary and frequently injured by pushing against wooden yokes when pulling heavy loads for a great distance. Lightening the load to reduce the injury and fatigue made transport ineffective and thus too expensive.

The use of horses to pull canal barges made the problem especially acute and led to a carter wrapping the wooden yokes with fabric and straw, shaping it to the horse’s chest and then covering them with leather. It took a many years for this to be perfected, but when it was done, canal barge traffic became efficient and lucrative

Another anonymous carter (or wheelwright) came up with wooden needle bearings to make wagon wheels turn more easily. Combined with collared horse teams, there was now a way to move goods from canal ports to any village or town with a reasonable road.

Oh yes, roads. Suddenly there was a good reason to build quality roads. This road building was facilitated by those same horses with leather collars pulling dredge pans.

Consequential actions followed. When Gutenberg made books cheap and available, these heavy books could be transported by the same horse-drawn means. Even better, two-ton printing presses could be manufactured, transported, and installed around Europe and then the world. Lots of books could be printed in lots of places. Knowledge itself became portable, widespread and timely.

2. When Galileo watched the chandeliers swing back and forth during a vespers service, and timed the arc with his pulse, it could have been a neat little “thought curio” to realize that the arc of a pendulum was only a function of its length and not of how far it was pulled away from original resting point. But Galileo was not content to discover only unrealized things; he wanted to know all about the phenomenon. This curiosity led him to drop those two metal balls from the Tower of Pisa. He didn’t understand what he had just discovered, but he wrote it down in detail.  He did know that the common understanding of gravity was wrong.

In the following years, practical people used his observations to create the pendulum clock. The mathematics of the pendulum was still lacking, but the empirical observation was good enough to make towns in Europe shift their civic point of pride from the fountain in the square to the clock in the tower.

It would be another hundred years before Newton and Reiman would publish their new branch of mathematics, calculus. Now there existed robust mathematics that made the study of gravity possible. Some clever mechanic realized that a spiral spring with a weight on the end behaved mathematically like a pendulum. Small clocks and then pocket watches soon followed.

The explosion that followed was not simply a matter of promptly meeting appointments. It created the science of navigation. In the 1600’s it was easy enough to determine a ship’s latitude by observing the stars. The angle of the North Star was sufficient information. However, there was no way to know the longitude. Consequently, for a ship to sail from Southhampton to Charleston, it was necessary to travel south to the latitude of Charleston, then turn west maintaining this latitude until Charleston appeared on the horizon. Heaven help the ship that was blown off course by a storm or fell into the doldrums. (This is how Saint Paul stumbled onto Malta.)

The ship’s chronometer (really just a very good watch mounted in a gimbal) made it possible to know longitude. Just compare local sunrise time to the sunrise time at a reference point, and there was enough information to calculate the longitude. Now, ships courses could be direct and finding one’s position at any time was straight forward. Transocean trade anyone?

This listing could go on forever – consider the electric light bulb, radio, telegraph, the Internet and the airplane. Technological progress is born in the minds of curious people, given the freedom to work.

Now, you may be asking (if you reached this point) what does that have to do with those four British locomotives in the picture? Just this –

They were a FAILURE, not just of technology, but of thinking.

In the nineteen-twenties, Britain’s coal industry could not keep up with demand. Coal was needed for home heating, electricity production, and railroads. In a vain effort to make locomotives more efficient, a bureaucrat decided that locomotives should have a fairing place around it to reduce air friction.

However, steam locomotives are delicate beasts that require regular inspections and frequent maintenance. The fairings interfered with both, and soon breakdowns followed. The conversion of heat energy to pressurized steam and then to rotary motion necessitates that some things are hot and some other things are cold. The fairings interfered with that and the peak power available from the streamlined locomotives was less than that of an equivalent open locomotive.

The failure was not in the fairings; that was an experiment worth trying.   But the “coolness factor” kept the failed fairings in place until the late 1940s, when the ‘art-deco’ appearance became less progressive in the public perception. No one ever seemed to realize that the inefficiency of a steam locomotive is demonstrated, even identified, by the blackness of the unburned coal in the smoke. The failure was letting ‘coolness’ override the experiences of the train’s operating and maintenance crews, and ignoring the real problem of the black smoke.

Technical progress is like that. ‘Cool’ is an incidental byproduct, never a goal. The science of progress is a series of idea upon idea, thought upon thought, free minds taking things apart and putting them back together with a difference. It’s much more down and dirty work of thoughts and hands than sophistication and coolness of individuals.

I seriously doubt that the editors and the writers for The Atlantic understand this in any field, and certainly not in technology.

Postscript by ALH: There are other ways to consider the silliness of the essay, of course. Below is the original post from one of the authors, along with three responses from people on twitter. Someone on twitter also pointed out there is already currently a Society for the History of Technology. I also consider this conversation at Oxford to be related. Or, as I worded it in one essay published a long time ago, “Whose progress?”