Me: This is my favorite birthday song, back from when I was a little older than you.

Emily: Wow, Mom. You were alive then? You are OLD!

Emily: Did people really dance like that? What does she have in her hair?

Me: A giant bow. Yep, I wore that too, and I tried to dance like her.

[From our London correspondent] Standing in the Rain for Jesus

The Profligate Grace team is delighted to bring you this report from our London correspondent, Angela, and her friends in the Christian Campaign for Nuclear Disarmament and Christianity Uncut.  Read on for an improbable (but true) account of their act of witness outside the recent Leadership Conference sponsored by a very, very prominent evangelical Anglican parish.

Christian CND first heard that Holy Trinity Brompton Church was hosting the CEO of Serco at their Leadership Conference via Twitter.  Serco is part of a consortium that manage and run the day to day operations of Britain’s nuclear weapons programme.  It was one of three companies to sign a contract with the UK government to run the nuclear project for 25 years from the year 2000.  That Serco have a huge stake in seeing Trident (the UK’s nuclear weapon’s project) renewed is not in doubt.  At first, Christian CND assumed that Holy Trinity Brompton had not realised that Serco managed the UK’s nuclear weapons.  Many people in the UK would more typically associate Serco with immigration removal centres, prisons and prison transport.  However, we were alarmed to discover that the HTB Leadership Conference website stated “[Serco] take care of the nuclear arsenal for Britain”.  Upon realising that the church was in full knowledge of this information about Serco, we watched Chris Hyman’s profile video.During the video, Mr Hyman asserted, “ultimately…the most challenging job we have is giving hope to people and to making sure business is done the right way”.  We failed to understand how nuclear weapons “give hope”.  Indeed, Christian CND were pleased to observe that in 2007 the Church of England passed a resolution at General Synod stating “the proposed upgrading of Trident is contrary to the spirit of the United Kingdom’s obligations in international law and the ethical principles underpinning them.”.  As a company, Serco have previously been found to act in ways that might be described as morally dubious.  (Check out Christmas Island detention Centre for some of their more luxurious accommodation.) END_OF_DOCUMENT_TOKEN_TO_BE_REPLACED

While making cupcakes and washing dishes, I have listened to my little kitchen radio chase down stories like this (on the factory collapse in Bangladesh), and, today, more of the same – this time from Cambodia.

Think global, and act local?  The local and the global are all intertwined, as proven by Art Pope’s little empire.  Sell products outsourced to poor, unregulated countries to poor people in your own state, then use the money to push through more policies that weaken the rights of workers in the remaining industries and services. END_OF_DOCUMENT_TOKEN_TO_BE_REPLACED

We’re proud to host this report by Patrick O’Neill, whose writing appears in the National Catholic Reporter, the Independent Weekly, and the Raleigh News and Observer, among other places.  Patrick and his wife, Mary Rider, are co-founders of Garner’s Fr. Charlie Mulholland Catholic Worker House, an intentional Christian community that provides hospitality for men, women and children in crisis. They have 8 children. 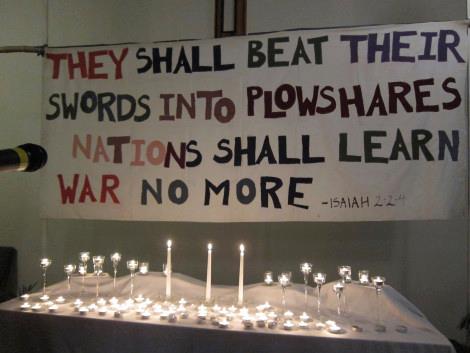 NOTE — During a Thursday morning hearing to decide if Michael, Greg and Sr. Megan would get released pending their Sept. 23 sentencing, the judge, a George W. Bush appointee to the federal bench, was clearly struggling with his decision because it appeared that he might have “no choice” but to remand them to custody because the U.S. Attorney told him a congressional law might require him to do so because the three were found guilty of sabotage — an “act of violence” against the United States. “It is preposterous that Congress would pass a law that would not distinguish between peace protestors and terrorists,” the judge said — and off to jail they went. END_OF_DOCUMENT_TOKEN_TO_BE_REPLACED

Carol Burnett: Gone With the Wind