Why I Teach a Dead Danish Philosopher 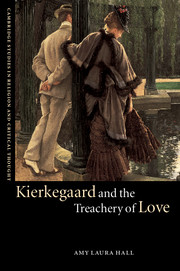 When people find out I teach at Duke, they often ask what I teach. Given that I teach classes ranging from “War and Masculinity,” “Sexual Ethics,” “The Love Commandment,” and classes on medicine, and technology, my answer is complicated.  If I have not totally bored them, their next question is often about my writing.  I skip quickly over my first book, saying it is on a dead Danish philosopher, moving on to my second book about advertising.  I realized recently this is silly.  Just because his name is odd does not mean I should shy away from talking about him.  So, this month, I will explain why I teach a dead Danish philosopher named Søren Kierkegaard.  A friend suggested I say his name is pronounced “Cookie Guard,” which works fine.

I was taught early that the only Christian affirmation you can see with your own eyes is that we find original ways of sinning. One way of sinning I have seen with my own eyes is treating another person or a group of people as tools.  I have met people who even seem to think of themselves primarily as tools.  Kierkegaard borrowed this description of human sin from a Prussian philosopher named Immanuel Kant, who borrowed it from Jewish and Christian teachings.  Basically, thou shalt not treat another person as a tool.  That is one of Kierkegaard’s core affirmations, and this made him odd for his time.  Kierkegaard studied in Germany in the nineteenth-century, when most of Western Europe was keen on a style of thinking about people and history that sorts people into different types.  There are people who are useful, but who are not really people; people who are useful, and possibly capable of deciding some things for themselves; people who make themselves useful by doing the sorting of other people; and a small number of people fit to make decisions for the other three types of people.  This stair-step sorting of people was not new, but there was a new sense that all of human history depended on sorting and using people efficiently.  Due in part to industrialization, which meant new machines and new ways of moving people around, people at universities across Europe preached a message of sorting people, for the sake of moving history upward toward a goal.  When combined with a sense that this sorting is God’s will, the message was powerful.  Wisdom could be confused with knowing your place, and your neighbor’s place, and faith could be confused with obedience to whomever was above you in this sorting scheme.

I continue to teach Kierkegaard because this way of thinking continues. The unspooling of this sin happens in different forms of Darwinism, capitalism, Marxism, and progressivism, to name only a few Western isms, and there are Christians who mistake this as truth.  And, given that dominant Western culture continues to define what marks an upward trend of ‘progress’ and ‘development’ in non-Western countries, this sorting-people-as-tools ideology shapes the lives of people outside Western culture.  Many of us have been taught in some form to make ourselves useful for the sake of a larger project, and to measure and judge other people, even people close to us, by their fitness for that larger project.  ‘God’ can become the liquidator of individuality, to make a person see herself and other people as tools for the sake of a region, a family, a nation, or another human institution.  Kierkegaard went back home to Denmark after studying in Germany to write books that resituate everything.  He writes that to be human is to be infinitely known and extravagantly beloved by God.  This being-known-by-God is not progressive; it is not up a ladder toward a goal.  God does not know us little by little, as we become more useful as tools for some project.  Instead, Kierkegaard describes this being-known-by-God as a repetitive “moment” called grace.  God recreates us daily, just as God created all of the world out of nothing.  So, for me to assess myself or people around me by whether I have become more useful to a larger project is to make an error in perspective.  I am seeing badly, because I am seeing apart from the incalculable gratuity that is you, me, and everything that is.

The implications for this way of thinking can shape everything from sexual intimacy to education, from the workplace to parenthood. Kierkegaard did not sentimentalize Christianity so that I am only shaped by grace in certain circles.  He suggested I risk seeming outright foolish by every form of tool-thinking.  For students who have been taught to justify their very existence on the planet, by scoring well on this or that tool-measuring test, this foolishness is both scary, and very good news.