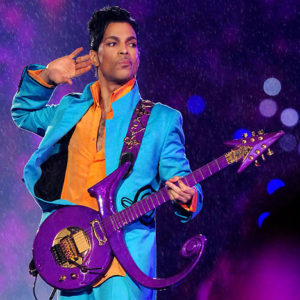 One of my favorite Durham memories is of the 2011 Prince vs. Michael Jackson dance party on 9th Street.  People who had danced to their music as adults in the 1980s were dancing with strangers who were born in the 1980s.  It was a spectacle of sheer, shared joy.  We “went crazy,” forgetting for an evening ways that Durhamites are divided from and taught to fear one another.

I was 16 when Purple Rain came to the theater in San Angelo, Texas.  I am pretty sure I went to see it with a close friend from church and her sister.  It was cheesy in just the right way, and Prince was the most beautiful person I had ever seen on the big screen.  I had a crush on Han Solo when I was little, and I loved David Lee Roth’s devil-may-care ways on MTV.  But Prince was a different universe of sexy.  He conveyed in his music an unselfconscious joy-in-common that suggested to my 16-year-old virgin self an inkling of what sexual intimacy should optimally be.

A twitter friend reminded me this week that Tipper Gore and her team of schoolmarmy scolds were clutching their pearls over Prince’s song “Darling Nikki.”  In her book about how dangerously menacing our “X Rated Society” is, Tipper Gore tells a story about buying Purple Rain for her 11 year old daughter and coming across “Nikki.”  She writes, “At first I was stunned – then I got mad!”  In case you have never heard the song, it is as if you mixed Sesame Street with Tim Curry with Donna Summer’s “I Feel Love.”  If you have never heard Donna Summer’s “I Feel Love,” rectify that soon.  Anyway, “Nikki” was the first time I had heard a song about a woman masturbating.  “She Bop” by Cyndi Lauper had totally gone over my head.  I had no idea what Cyndi was singing about until after college, when a British friend explained what “bop” meant.

Our radio station in San Angelo played Michael Jackson every hour in the late 80’s.  Prince was more risky.  And I sure as heck did not hear “Darling Nikki” on the radio.  There were other provocative songs on the radio.   Even a decade after it came out, Billy Joel was still singing to a Catholic school girl that “only the good die [have sex] young” and Def Leppard was regularly heard screaming “Pour Some Sugar on Me.” But neither of those songs are sexually appealing.  Billy Joel did not come across as an attentive lover who would take actual time with Virginia, once she finally agreed to “come out” and “not make [him] wait.” And Def Leppard’s demand for sugar was just plain rude.  If you really want some sugar, Mr. Leppard, you do not scream at someone to pour it on you.  Gawd, the stupid lyrics to that overplayed song – that, dear Tipper and friends, is a reason to get mad.

Prince sang like he genuinely liked and knew particular women.  He seemed to have friends who were women, which turns out to have been true.  I will attach some links below on this point.  But as for my 16 year old self, I remember thinking that it was super-duper-transformative-radical for a man playfully, sweetly to refer to a woman’s own pleasure in this way.  This is also in his song “Let’s Go Crazy,” when he calls his sweetie and she drops the phone, panting.  I suppose you can read that song multiple ways, but I always thought it was his Darling Nikki, happily at it again.

The author and your blog editor would also like to bring this piece to your attention, which considered – among other things – the apocalyptic valences of Prince’s work.