[Alan Felton] Why did I go?

We are delighted to welcome the Rev. Alan Felton, pastor of Resurrection UMC in Durham, to Profligate Grace once again.

I stood on the muddy quad in front of Duke Chapel today and heard the adhan, or Muslim call to prayer.  Why did I go? 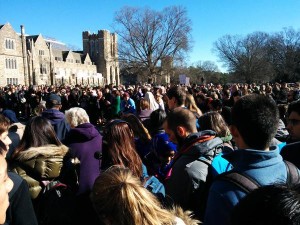 I don’t know the motivations of all those who gathered at Duke today. I imagine some standing there were merely curious.  There were a few news reporters and security personnel paid to stand on the fringe of the crowd.  I’m sure others were there to support the free speech rights of American Muslims.  But, why did I go?

The whole event was somewhat anticlimactic.  Anyone who came out expecting to see fiery protests or anything worse was sorely disappointed.  The call to prayer was explained. It was sung in English and Arabic. The Muslims left to go into the basement of the chapel to pray (which they have been doing for years with much less attention).  I spoke to a few friends and then wandered off to eat lunch and think more about the sermon I will preach on Sunday at the church I serve.  I posted a photo of Duke Chapel on my Face Book page with the caption “The chapel is still standing” lest anyone think the bell tower had been brought crashing down on us by the words of the adhan.

There were no protests against the adhan or Muslims yet, in the days leading up to today’s event, many objections were heard. The loudest voice of opposition came from Franklin Graham, son of the great evangelist Billy Graham. This is not the first time Franklin Graham has loudly voiced invective against Muslims.  He has been a fixture on Fox News in recent years denouncing Islam and proclaiming dire warnings against those who adhere to it.  Earlier this week he called for alumni and other supporters of Duke University to withhold financial support until the decision about the adhan was reversed.  He quickly got his way.

Franklin Graham may be crowing in victory but what he did in the past few days has revealed something vile and disgusting within the soul of many Christians.  He has spouted a theology of ignorance, intolerance, and fear.  Graham has spiced up his comments with a dash of American exceptionalism and a pinch of childish bullying along with a spoonful of good ol’ fashioned misunderstanding.  The whole recipe is indescribably delicious to many yet it is hard to see much Christianity in what Graham is saying and doing.  His stand on Muslims seems to be inspired more by the gospel of Dick Cheney than the Gospel of Jesus Christ.

I am not naïve about the dangerous rise in Islamic fundamentalism.  There should be appropriate concern about ISIS and Al Queda and Boko Haram. We should all grieve and condemn the recent hateful and deadly attacks in France and Australia and Nigeria.  The rising tide of violence and extremism across the world is a cause for concern and attention.  I do not believe Islam and Christians are identical in what we believe.  There are clear differences that must be acknowledged.

Islamic extremism and the violence of terrorism however was not at all what the hoopla at Duke was about this week.  The uproar in fact had very little to do with Islam.  The real issue in play is instead something rotten at the core of much of what passes for Christian faith these days.  The problem is not Muslims wanting to pray at Duke.  The problem is the reaction of many Christians when they hear about this desire.

Franklin Graham’s words and actions perfectly illustrate this problem.  The underlying dilemma with Graham and his ilk is that they are consumed by fear rather than being filled with hope. Fear has long been the weapon of choice by demagogues and ideologues throughout history.  Fear is the well-played card played during every election.  Fear is the constant undercurrent in our society today.  I am always amazed at how gullible we the people are to unspecific “threats” and meaningless “raisings” of the so-called terror alert system.

Living in fear may be something many Americans find acceptable, but fear should not influence Christians in the same way.  Christian faith is ultimately about the hope given to us by Jesus Christ who died on a cross and rose from a grave so that fear might be banished from our hearts once and for all.  Jesus is the center of Christian faith, not a beautiful chapel or a preacher claiming to be a defender of that faith.  Faith that can be eroded by the expression of another, albeit different faith, is not much faith at all. Jesus cannot be diminished by the adhan or any other non-Christian religious observance.  The only thing that can diminish Jesus is when Christians choose to replace him in their hearts with the scourge of fear.

Allowing the adhan to be sung at Duke Chapel today was not the beginning of the end of Christianity at Duke or in this country. It was instead a mark of generosity and hospitality that is at the core of believing in Jesus and living by his example.  Jesus said, “In everything do to others as you would have them do to you; for this is the law and the prophets” (Matthew 7:12, NRSV).  Yes, I know many Christians are not allowed to freely express their faith in other nations.  This is a concern.  Yet, instead of responding in kind, I choose to respond as Jesus tells me to do.  I choose to live with the hope of Christ as my lodestar rather than the fears preached by Franklin Graham.

Why did I go to Duke today to hear the adhan?  I went because Christ led me there.