This Labor Day, I Want a Union

I have been working this past year on an effort to encourage people to say the words “labor union” (without epithet) at their place of worship the weekend before Labor Day.  My favorite encounter came this summer.  I was at a worker justice rally in downtown Raleigh one Monday, handing out snappy fliers with a picture of an apple pie.  The flier read “Labor Day is as American as apple pie.  So are labor unions!”  I spotted a labor trailblazer in a group of people, so I waited politely for my turn to talk to him.  I flashed my smile and pulled out a flier, with flourish.  He looked at it and said, without a blink, “Do you have a union?”  “No,” I answered back.  “Why not?” he asked.  Huh. 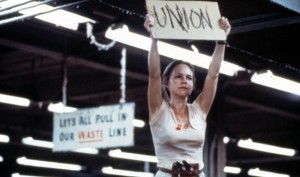 I am an educator, and I was raised by a public school teacher.  When I first saw the movie “Norma Rae,” I knew who Sally Field reminded me of.  The workplace was different, but the moxie was familiar.  First, I need to tell you a bit about my mother.  I grew up in West Texas, and my dad is a Methodist minister.  We moved seven times before I turned twelve, because that’s the way the pastorate works in the Methodist church.  My mom is 4’ 9” and weighed about 100 pounds wet.  She followed my dad for his work, and she had to start over repeatedly.  She had to clamber up from the bottom of the isolated systems that were public school districts in Texas at that time.  (I trust things have changed since then . . .)  These systems were often uniquely absurdist, overseen by coaches (all men) who may or may not have been gifted by God for administration.  I say “uniquely” absurdist because each school system, whether overseen by a gifted or inept administrator, had people lower in the system trying to curry favor and aver disfavor from the particular man in charge in our “right to hire and fire state.”  When the pater familias has free rein, the people below him have to figure out the explicit or opaque rules of the particular game.  My mom had to figure out how to secure and keep her job, again and again and again, under a new set of rules in a new context, while teaching whatever the school system had need for at the time.  She is a genius, and she has the pluck of Crystal Lee Sutton (the real Norma Rae) so she was somehow able still to love teaching junior and senior high for three decades and also truly to befriend, love, support, and encourage the teachers around her.  (Her colleagues still tell me stories of such when I go home.)  But my mom always wanted and needed a teachers’ union.

My mom’s bosses are all retired or dead now (may they rest in peace) but my own bosses are quite living.  And I have been reticent to link my volunteer efforts for labor justice to my own calling as a teacher.  I have a new big boss, and she actually seems truly wonderful.  But I need a labor union just as much as my mom did.  Universities are as pressurized by funding stresses and small fiefdoms as any other institution or corporation in the United States today.  Faculty members who kowtow to the favored local or national magnates are encouraged, or at least not discouraged.  I’ve learned through subtle and sometimes overt cues in my fifteen years of teaching that using catch phrases either that support the magnate’s pocketbook or stay sufficiently theoretical to remain above any particularly moneyed fray are two ways to get ahead or at least stay afloat.  I’ve found that curious and gifted people around me spend too much of their intellect and energy just treading water.

What I need in my workplace is not a media-savvy movement, with a snazzy name and a recognizable visage attached.  And, what I need is not a patronizing boycott, with people spending their money only at institutions or business that have benevolent leaders who seem, when possible, to treat us workers as human beings.  What I need is a union.  I need a working coalition of educators who support one another to pursue our gifts of teaching, writing and research with dignity and the freedom to write without fear of reprisal.  I need the power of collective bargaining, so we see one another as co-workers and not competitors.  And I need the tools to organize, so we can work together and secure the best working place for our students and ourselves.  So, this Labor Day weekend, I am praying to God for the courage to say I want a union.

From: Church, Ethics, Organizing and activism