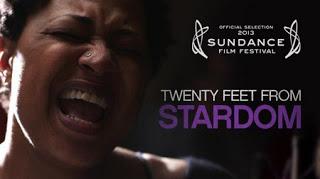 It turns out that super-spiritual-tantric Sting needs more than a message in a bottle.  He needs a sit-down and come-to-Jesus.  And, maybe if Mickey J. had actually made love to (rather than just “had fun with”) the woman singing with him on “Brown Sugar,” he might have gotten a clue and used his charismatic power to shake-up the white boys’ club that is the industry.  Well . . . a girl can dream, right?

If you live in the Triangle, please go see 20 Feet from Stardom at the Carolina.  It just won’t be the same on a small screen.  This is a rare opportunity to hear some of the most gifted women in music.  Each one tells a unique story about the history of backup singers.

The Carolina itself has a history.  50 years ago, after young people across color lines had spent years in creative protest, African-American and Anglo Durhamites walked through the same door, and even sat next to each other, to see films like Bye Bye Birdie, Cleopatra, and Love with the Proper Stranger (all hits from 1963).

One of the amazing students in our joint Duke/North Carolina Central University class on “Race and Place in Durham” wrote a research paper on entertainment and race in Durham, by contrasting two Durham venues for the arts.  (Ellen Paddock will publish a version of that piece somewhere soon.  Won’t you Ellen?)  This documentary about backup singers is another route into a related conversation about just whose gorgeous voices are showcased, and why.  At the beginning of the film, watching David Byrne dance with supreme awkwardness while the African-American women singing next to him had to appear simultaneously in-sync and also contribute their required, erotic oomph, I thought to myself, “please, let this prompt viewers to ask which jackass built this beautiful house.”

There is also plenty to mull over about what I call the “Secret Life of Bees” version of cross-racial “friendship.”  For Men in Space, from the Matrix to Star Trek to Battlestar Galactica, there is often some version of Black Woman as Spiritual Midwife.  For stories about sexually constipated white women, there is often some version of Black Woman as Sexual Liberator.  The pottery scene from that stupid Ghost movie is perhaps the most obvious example, but 20 Feet from Stardom can prompt a longer conversation about how dominant American culture subtly attributes erotic freedom to African-American women, then uses, controls, sidelines and/or punishes Black women for that very attribution.  (Just for the record, the film does not sugarcoat Ike Turner’s story any more than it does Phil Spector’s.)

I also watched The Corporation again yesterday with the girls, on our little screen at home.    There is a man in the movie named Ray Anderson who happens to look a lot like my dad.  He talks about having an “epiphanal moment” after reading a book about environmental, global collapse as he saw a cascade of things about his position inside the Giant Godzilla of Capitalism.  (One of the images in the movie is of the Corporation as Godzilla.  It turns out I stole that from them.)  Anderson stands in contrast to the head guy from Shell, who sat down and had tea on the lawn with some protesters, but didn’t seem to learn much.  (Ditto the Nike guy.)  Mr. Anderson seems to have had a conversion of the soul, where he was thrown off-kilter and saw his location through a different perspective.  As I watched him again yesterday, I found myself connecting the two documentaries in prayer.  I found myself really, really hoping that Bruce Springsteen and the rest of the big guys who, as my older daughter put it, “show their butts” in 20 Feet from Stardom are thrown off kilter by the movie, and see the industry that showcases them as not about individual initiative (really?) or about unequal talent (Grrrrrr!) or about the need for “spiritual” connection (sigh, Sting) but about a white, patriarchal system that defines, packages, and sells what counts as good music.

The same can be said of the big white guys in the Christian academy, what with our showcased theology and our spotlighted arts and such.