Guns and Roses: A May Day Wish 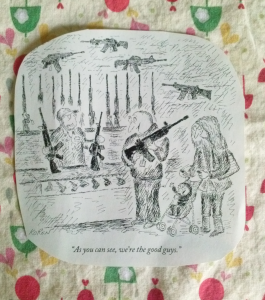 Someone gave me a persnickety clematis years ago, and it is supposed to curl around my beautiful moon gate.  My effort to embrace gardening has been going better than my turn to yoga, but only just.  I have a hard time with the whole patience part.  But this particular little (reputedly flowering) vine seems determined not to give up.  She makes her way up just a few centimeters, for a few months each year.  I just checked this morning, and there are two new shoots coming out of the dry twigs near the dirt.  Maybe this summer we will actually have a clematis bloom.

Truthful solidarity seems to me to be that fragile but tenacious.  Candid, neighbor to neighbor conversation about the streets, schools and shops that we share are hard-won.  With streamlined check-out queues, stamps.com, mega-church anonymity, and segregated private and chartered schooling, I don’t have to make even trivial chitchat with the check-out guy at Kroger, or visit with a woman holding a weirdly shaped package in line at the Post Office, exchange more than a passing peace during worship, or awkwardly discuss bilingual education with a Latina mother.  If I am not intentionally courageous – if I don’t risk wary looks and profound disagreement – I can stay happily within my own, myopic, specialized little perspective on our lives “together.”

Americans have political litmus tests.  Gun control is one.  It is as loaded (sorry) as abortion.  Is this because a Gun and a Womb are archetypes in our gender binary society?  Is it because a Gun is a kind of symbol for Manhood and a Womb is a basic symbol of Womanhood?  Both have to do with life and death.  Each has become intertwined with big $$ politics and division.  The sheer force of the NRA as a lobby is enough, in itself, to baffle and sometimes fundamentally discourage many white progressives.

I am going myself to risk baffling some of my million-moms-marching friends by suggesting that “Gun Control” has become a distraction – a distraction that conveniently preoccupies and divides men and women, Black and Anglo, on either side of the debate, from one another.

On the one hand, you have people who have become convinced that the way to read the Rorschach test of startling tragedy in otherwise cocooned neighborhoods is to legislate Gun Control.   The implicit idea on the professional, progressive left runs this way – crazy people in the suburbs seem to be able easily to get their hands on big guns, and people who want to have more guns (rather than less guns) are, let’s face it, probably backwards, racist, and crazy.  We, in the other hand, are rational and cosmopolitan.  We need to stand up against crazy people, however much $$ the NRA has.  The implicit idea on the basic, working-class, conservative right runs this way – those people have gated communities, hidden cameras, and well-dressed hired thugs.  They want to make sure we stay in our place.  We have a right to protect ourselves from tyranny.  We need to stand up against gun control.

Meanwhile, people on the left generally fail to recognize the hypocrisy within ourselves, as we watch a drastic uptick in interest in the issue when a white congresswoman is maimed and/or lots of children in a 95% white suburb are murdered.  And, many of us are loathe to name the hypocrisy of our beloved presidency, as we ramp up drone warfare abroad and the use of police drones for surveillance to “keep us safe.”  And, on the other hand, confound it, why the flying burrito brothers do my beloved working-class, white kin not get it that the Koch brothers et al. would much, much, much prefer that working men pay attention to individual gun control than, say, their overall evil plan to play on racial divisions and fears about immigration in order more effectively to weaken efforts to unionize workers across the country?  “I may not be able to keep my job, in this intentionally brutal economy, but at least I can keep a few more guns?”  Really?  Is that what our brothers in the IWW died for?  Sigh . . .

Lillian Smith has a helpful chapter in her 1949 classic Killers of the Dream that describes “Two Men and a Bargain,” a way that wealthy employers in the South were able to divide white and black laborers, and to convince white laborers to take on the brutal work of reinforcing the bloody, racial hatred that would keep labor costs in the South cheap.  It is a story set in the South from my grandparents’ era, but I recommend it as a way to read the manipulation of race and masculinity during conversations about “Gun Control.”  In the US, at least, definitions of masculinity are intertwined with a man’s ability financially to provide for his family.  If you need a direct reminder of this fact, watch Marky Mark here.  The unfettered ability to buy a gun seems perhaps to stand in for our capacity, right now, to secure decent working conditions.  For an older generation of men, the NRA plays on fears that those people who have taken our jobs will also break in and take our remaining goods.  For a younger generation of men, those who pay attention to geopolitics, veterans, or who have friends who are veterans, it also plays on fears that the US government couldn’t give a rat’s ass about using a whole generation of men as cannon fodder during two wars based on lies.  It is heartbreaking that the now Koch and Rove funded NRA is able to use the fact of their own well-designed, grand emasculation of young men to market gun rights as a substitute for workers’ rights.  It is also heartbreaking that the neo-liberal talking heads on my NPR station Monday jumped smugly to the conclusion that the Boston bombing was likely the work of xenophobic, white separatists, suggesting that nothing scares NPR listeners like myself more than angry, lower-class white men who want to keep their guns.  That is, unless, say any-class of Black man with a gun happens to get on the elevator with me . . .

All of this mess depends on keeping people separated through media-segmentation and fear of one another.  But it also trades on a sense of individual responsibility for the shame that comes with economic vulnerability.  I have a schoolgirl crush on Lee Camp, and, after hearing waaa—aaaa-aaaa—yyyyy too many  Christian men excoriate their male parishioners for not being manly enough, his curse-word laden screed against a punishing culture of personal responsibility was balm for my soul.  To disenfranchise men systematically through outsourcing and union-busting and civic-worker-hating legislation and then to showcase preachers who use the Gospel to bust the cajones of working men who cannot find decently paid work in their craft or field, as I’ve encountered all too often in my research – that seems pretty much evil to me.  Sort of an anti-Gospel, frankly.  (It is another treat in the leadery leadership seven layer dip of lies to suggest that feminism is to blame.)

So, this is a week that begs for hope.  And, as I sit on my back porch dusted with all the golden evidence that (as my friend Shannon jokes) “God really enjoys sex,” I am going to recommend two stories of hope and issue one invitation for foot-work.  This first one is a bit odd, I guess, but, I suppose that I am odd, in that history helps remind me that “our time” is not a particularly, uniquely bleak one.  The “History Guys” give helpful snapshots of Americans and guns here.  In the last segment of that podcast, Brian visits a gun show in Richmond, and he finds that the appeal of guns to younger owners is that they believe guns will help them to create a well-ordered neighborhood.  Might it be possible to acknowledge that motivation charitably, to note that desire for some kind of camaraderie across households, and to shift the impulse toward collective, justice-working action and away from fear of intruders?  The second recommendation is that the other story from this week is worth lots, and lots of attention, even though it happened to a bunch of boring Texans in a town whose name just confuses people.  While left-leaning and right-leaning outlets are going to battle it out over the meaning and implications of the Boston bombing, the tragedy of industrial deregulation in a massively deregulated state will probably go mostly unreported.  Maybe the fact that those who died were volunteer firefighters will help focus attention.  I hope so.  But, after paying attention to that news, and, I hope, finding yourself riled up, listen to this gem, about how some brave mothers took on nothing less than the craziness that is Chicago, local politics, for the sake of their own community.   And they didn’t have to carry a side-arm to do so.  Finally, if you are in Durham, mark your calendar for May 5.  Come to Holy Cross Catholic Church (promptly) at 3, and enjoy some neighbors working together, non-violently and passionately, to make our own neighborhoods conducive to holy flourishing.   It will look something like this.  Nothing fancy, but just about as precious as that long-awaited bloom.