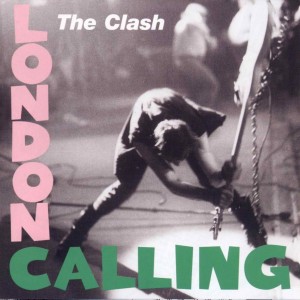 There will (probably) be no guitar-smashing in “War and the Christian Tradition,” but I encourage DDS students to sign up for it anyway.

The English talking heads are dignifiedly divided on the legacy of Lady Iron.  I skipped the big movie about her, choosing instead to replay favorite scenes from other movies (Billy Elliot, Brassed Off, The Full Monty) and to hula hoop to The Clash’s “London Calling.”  I recommend this intricate scene from Billy Elliot, set to “London Calling,” which draws me like a bee to blackstrap molasses to listen always again to “Clampdown.”  (A writer for Mother Jones posted this related gem.) Steve Nallon, a Thatcher impersonator from the popular English show  “Spitting Image” said on this morning’s BBC that she was fun to mimic because she was so straight forward .  She was brutally direct about the destruction going on under her name.

A line from The Clash’s “Clampdown” inspires me as I slog through my reading list for a class on war (next fall).  “We will teach our twisted speech, to the young believers.  We will train our blue-eyed men to be young believers  . . .”  Stanley Hauerwas has graciously passed me his baton, and I’ve decided to affix what had become his class to a conceptual guide he gave me the first time we met, around about 1993.  I visited a seminar he was teaching on language, I believe, and he said something along the lines of “the best Christian theologians can hope for is to expose the lies of political speech.”  So, this class is not going to be an analytic back and forth on just war and pacifism.  It is going to be a class on war, twisted speech, and young believers.  I want to think through the ways that blue-eyed and brown-eyed men and women in the U.S. have been trained to live always already in the ways of war.  War is a LIE through which we live, and move, and have our being.  If you think this is just a right-leaning problem, see dear old “Mother Jones” herself publishing this crap, normalizing drone strikes as just another topic for amiable conversation.

The ancient, anchoring text for the course is Augustine’s On Lying, and the requisite inkling touchstone is “The Inner Ring,” by C.S. Lewis.  Thanks to Isaac Villegas (thanks, Isaac!) I chose Chris Huebner’s A Precarious Peace and Paul Virilio’s Pure War  (which inspired that Acts/liturgical twist above).   Thanks to wonderful Stan Goff, we will read Sex and War, alongside his posts on Holy Week.  In memory of my paternal grandfather, who barely survived the Pacific War, we will read John Dower’s meticulous coverage of race, propaganda, and war in War Without Mercy, and, in honor of a contemporary, beloved family member, who gave me the i-tunes copy of this for my birthday, we will read Confessions of an Economic Hit Man.  We will also read On Killing, a classic by Dave Grossman, and Chris Hedges’ War is a Force that Gives Us Meaning.  (I love that I just had to watch a jell-o PB and J cupcake advertisement to see that video . . .  Meanwhile, why haven’t we had Chris Hedges come to speak at Duke Divinity yet?)

Augustine teaches in that short essay that lying matters, the little lies and the BIG LIES.  But many young Christians in the U.S. have been taught to respect authority to the point of obeisance, and ignorance.  I have suggested in the past that you can divide Duke students by asking who has cleaned their own toilet, who has cleaned someone else’s toilet, and who has never cleaned a toilet.  (No, not divide them like sheep and goats.  Some of my favorite people on the planet were once children for whom I was a nanny on the Gold Coast, darn it.  I just mean divide them in terms of their perspective on various things not obviously related to toilets.)  Wikileaks is a new dividing line, as young adults sort through what they think of Bradley Manning, whose trial SHOULD be on the front page at your local grocery line, instead of images of a Kardashian booty .  (So much wrong with that, don’t know where to start – lay off her happily pregnant big booty, pay attention to his torture and silencing, might be a beginning.)  At his best, Stanley Hauerwas taught me that it is a work of love to speak the truth to someone.  For two brief favorites, see him here and here.  It is my prayer that I can begin to teach “Hauerwas’s” war class in a way that encourages truth-tellers, whether they be gentle, or loud, mischievous or mathematical.

Which takes me back to London.  I would suggest that the most faithful way to honor the death of Lady Iron is to join Desmond Tutu, who honors Jesus by telling another British Prime Minister to embrace his own truth regarding war, and to do it today, while he is still alive.  And if you don’t go in for the whole Jesus thing, do it for Joe Strummer (obm).