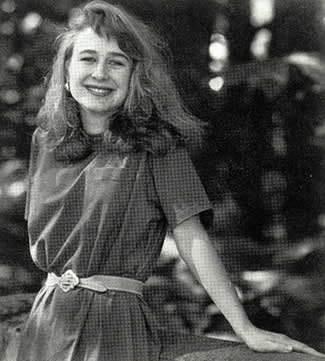 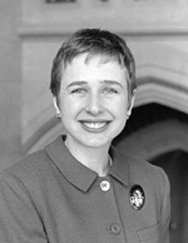 I remember buying that suit. It was my first professional outfit. I was with my mom, and she tried, gently, to dissuade me. “You look like a Maoist youth.”

I am still not totally sure why I cut off all my hair two weeks before my wedding, in 1990. I adored Sinead O’Conner and Emory’s Bobbi Patterson, both of them shorn, fierce, and loving. Maybe that was it. But, nine years later, my mom was right. Between the short hair and the plain cut of the suit, I was hardly a cool-chick rocker. I look vaguely androgynous, and bewildered. It was 1999, and I was not partying with Prince. I was Stanley Hauerwas’s junior colleague.

That same year, I gave some bad advice in the otherwise brave little essay for the Emory Women’s Center, and I would like to make a formal retraction. This is what I said:

Finally, on a schoolmarmish note, I would suggest that when attending an academic conference, you might consider dressing more like your mother than like Sassy Spice. Save your potential to shock for your radical new interpretation of Jane Austen, midwifery, or arachnid reproduction.

(Arachnid reproduction? I guess that was my attempt to be relevant to women in the sciences.)

That advice was wrong in every way.

I can now admit I had a particular “Sassy Spice” in mind. I had just been to the Annual Meeting of the American Academy of Religion, and one of my Yale colleagues had worn red, platform heels, a mini-skirt, and fantabulous earrings. I had worn my Maoist suit. (Which, let us note, my own mother had thought too conservative. So, I wasn’t even dressing like my mother.) Years later, when I gave a talk at the college where Dr. Spice was then teaching, she was still looking like a million glittering blingy bucks, and I was still jealous of her moxie.

Why the “schoolmarmish” advice? I was aware early on in the theological academy that I had a tendency to “shock” some male (and some, mainly older, female) colleagues. I asked inadvertently impertinent questions and laughed too loudly at jokes. Maybe I thought I could make myself less shocking. I realize now I have often thought of work clothes as a kind of costume and of academic life as one big street theater. With the right attire, I would be able to squeeze my outsize personality into the little box that is the proper, Christian female academic. 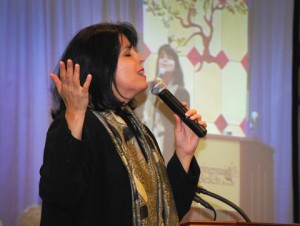 The Rev. Connie Shelton (via UMNS)

In fits and starts, I gave up that costume. A new friend who teaches Christian history in another country gave me the long, dangly earrings she had worn to an international conference, asking me, whenever I wear them, not to take for granted that American manners, in contrast to those in her own country, allow such adornments for female scholars. Another new friend with rhinestone, cat-eye glasses was wearing fishnet stockings to every Christian conference we attended. One colleague at Duke ignored the matronizing glare of an older, female colleague, and sauntered slowly down the halls in truly amazing high-heels. Connie Shelton arrived at Duke wearing remarkably red lipstick on her perpetually mischievous grin.

Little by little, I made my way to the woman who two years ago threw caution to the wind. With Joan Jett as my muse and my mom cheering me on, I bought my first pair of non-mom jeans in decades, and some truly catwoman wedge heels to go with the dangly earrings from my friend. I’ve even worn my non-mom jeans to work a few times.

Now that I look back on it, I realize I was encouraging bravery in every single way in that little Emory essay – bravery and sororal solidarity – except when it came to personal appearance. There, I advised caution, and used a negative example to make my point. By referring to “Sassy Spice,” I was using a subtle contrast of shame. Don’t be like Sassy Spice. Don’t startle those around you by dressing too obviously like a woman, or even worse, the wrong sort of woman.

The scene in Ron Howard’s stupid movie The Paper that I note at the beginning of the Emory essay stands as a warning. Don’t try to burst into a man’s world. If you do, you will be thrown out. If you want to make it in a man’s world, sneak in the back door, and don’t draw attention to yourself. Joan Jett, in her great, goddess form, takes that sort of mindset and flips it around here.

If you are, like me, an uptight white girl afraid of appearing unladylike . . . If you were disallowed from taking hip-hop or jazz as a child because it involved pelvic thrusts (horrors!) . . . If the people in power around you are men who are afraid of women, or women who are afraid of being mistaken for the wrong sort of woman . . . I recommend a daily dose of Joan Jett, or maybe even (if you are feeling truly abashed) the X-Ray Spex.

And, if that doesn’t work, read the genealogy at the beginning of the Gospel of Matthew, and remember that Jesus Christ came from a long-line of unruly women.