Who Would You Dance For? 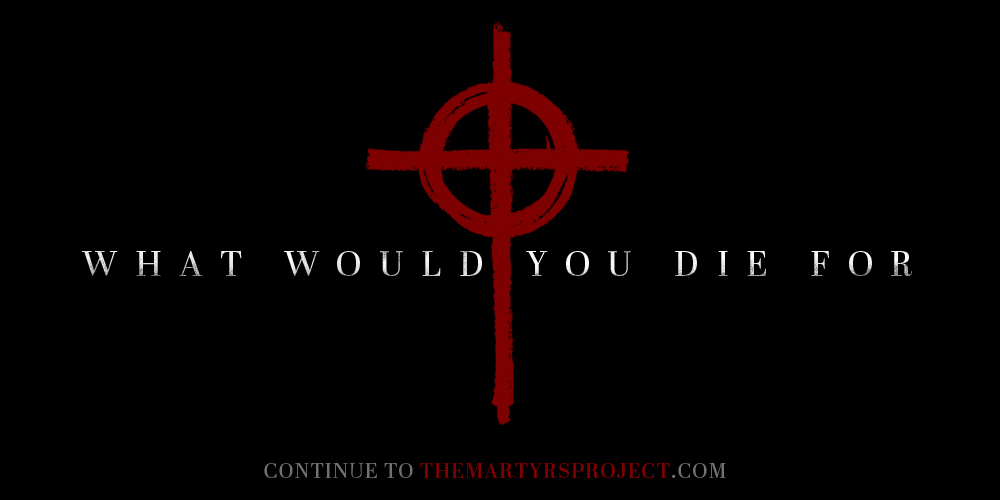 Someone with The Martyrs Project contacted me to ask if I would post about them.  Their icon looks like the one for the Blair Witch Project, crafted to convey: IMPORTANT, ANCIENT, and SCARY.  “WHAT WOULD YOU DIE FOR,” the opening screen from the Martyr Project states.  (There is no question mark, so it doesn’t actually ask.)

My gut response is: “Blech.” 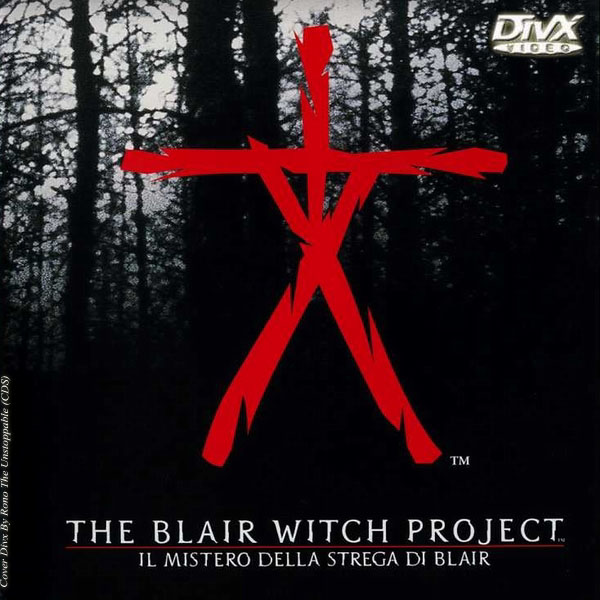 My more intellectually acceptable response is that, as someone who has written on Julian of Norwich and Kierkegaard, two church masters not exactly known for their joie de vivre, I need to keep sorting out why I disagree with theologies of productive suffering.

I think that “WHAT WOULD YOU DIE FOR” may be the macho flip-logic of “What would you kill for” – a self-punishing, masochistic underside of a sadistic culture of domination.  Both masochism and sadism mistake suffering for meaning.

The promise of meaningful suffering seems to be a provocative recruitment tool for some church movements and for armies during times when people feel as if their lives are less than meaningful.  This is a matter of economic class perspective, in part.  Less economically advantaged young men and women who sign up for military service because it is the only economically feasible way to get an education are not hoping for a way to suffer toward truth.  But some young people, and their parents, have heard an appeal to submit to military obedience in order to find purpose for their lives.  The Martyrs Project, perhaps like “New Monasticism,” seems aimed at a particular class of young people looking for meaning by embracing austerity.  I wager that many of the actual people shown suffering in the website’s video about Bishop Oscar Romero would have preferred to be singing in the pretty church with the contemporary guitarist than suffering under the U.S. sponsored torture-regime in El Salvador.  As one friend puts it, she has never heard someone who has to ride the city bus daily and/or works at Wal-Mart talk about righteous poverty.  But it has been fashionable, over the ages, to present suffering as a path toward self-renewal.

I can read this trend today psychoanalytically.  A relatively well-off, mainstream Catholic and evangelical white population of young (20-40) adults has been told, through a stream of generation-niche irony, that our lives have no core meaning.  Thoroughgoing irony is a sliver away from saying life is worthless, so we tear our psyches in two, like the main character in Fight Club, and beat the shit out of ourselves.  The allure of suffering as a route toward maturity is strong, and it is based on a premise of fundamental agonism – on the idea that the world is about competition.  The question embedded within such a premise of agonism is whether I will own and master my suffering – finding meaning through masochism, or choose to dominate and subdue someone else.

Consider, for example, the Blair Witch Project as a kind of existential, gut-reaction to South Park.  We watch in “real time” as three everyday-looking friends bond, through the decidedly un-ironic earnestness of a hand-held camera, and then get caught up in something vaguely deep, real, historic, and bloody, dying and/or killing one another in pursuit of the mystery on the edge.  (Theirs is a more complicated, lingering sort of horror story than a previous generation’s, where the message was, basically: enjoy sex and you will be impaled.)  Perhaps The Martyrs Project is a gut reaction to the apparent meaninglessness of what we might call Tom’s Shoes Christianity.  To follow a radical savior must mean something more than buying a cool pair of righteous, sparkly shoes for me and my girls.  But the answer to vapid, Facebook “like” Christianity – the kind of Christianity that the self-righteous ironists who write for South Park lampoon regularly – cannot be that I mistake myself for my own personal Jesus, able to bring about even my own little part of the kingdom through my own suffering. 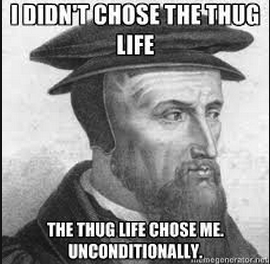 Is it coincidence that the creator of this Calvinist meme (not me, I promise) misspelled “choose” at the top? Of course not, because SOVEREIGNTY.

I do intend to keep sorting through SUFFERING as a person and as a Christian scholar, but, as I tried to respond to the Martyr website, I kept coming back to something John Swinton taught me in Raging with Compassion.  SUFFERING is not a question to be sorted.  It is an ecclesial call to attend – to be with one another silently washing feet and wiping tears.  Calvinist writer Kathy Keller put this simply at her National Prayer Breakfast women’s session on suffering:  being friends during times of suffering means “showing up with your mouth closed.”  Swinton (also a Calvinist) even goes so far as to call the removed, meaning-work of theodicy a temptation and distraction.  During her Q and A time, Kathy Keller, with her intensely analytic, biblically-crackling mind seemed led into such temptation when asked to “make sense” out of suffering that someone inflicts on another person.  Isn’t our most godly response to such suffering to refuse it?  My mouth fell indecorously open when Keller explained that God provides an “invisible protective shield” that turns a weapon into a “scalpel.”  So, she explained, if someone is wielding a knife against me, God’s shield “turns that knife into God’s scalpel.”  I was simultaneously impressed with the thoroughness of her doctrine of divine sovereignty and really, really grateful that she isn’t my pastor. 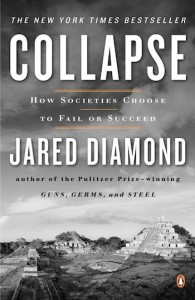 Jared Diamond conveniently excuses the colonizers and blames the colonized in Guns, Germs, and Steel and Collapse. (Click for more on why he’s wrong.)

I still need more time to think through all the reasons why I disagree with Sarah Coakley’s recent work on productive suffering.  (I have an extensive footnote — 47 — in this piece Kara and I wrote.)  It is a pastoral and even a theological mistake to try to situate suffering on a map or on a timeline.  If I find myself thinking: “Aha!  Now I can understand why X,Y, or Z truly shitty thing happened (either to ME, to MY PEOPLE, or to THOSE PEOPLE) because here on the map or storyline is the GOOD that will come out of it,” then I am probably driven more by a desire for cognitive control than healing and/or solidarity.  Coakley suggests that suffering is a fundamental part of how humans progress, biologically and eschatologically.   Nature is red, in tooth and claw, and history moves forward not only by way of those who run fast and gobble up the slow, but also by way of the individuals in a group who sacrifice themselves for others – who give themselves self-sacrificially to be gobbled up.  (Ok, yes, this is a silly paraphrase, but you get the idea.)  This seems a bad way for any individual to think about her suffering – as promoting God’s realm or God’s storyline.

And I definitely, resoundingly, want to say Coakley’s is a bad way for people to think right now, during the Second Great Depression.  The Big Guys whose economic shenanigans ($%#&*) have set things up for radical inequality would LOVEY LOVE LOVE it if a bunch of the Christian 99% started seeing “Austerity,” whether in Europe or in the U.S., as part of our self-emptying mission for the good of human history.   Brothers Koch and Templeton, even you guys cannot buy all theology to fit your purposes.

So, Martyrdom, anyone?  No, thank you. 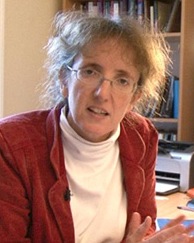 Karen Kilby gets it right on suffering. Go watch her video.

A lesser known theologian in the U.K. has a quiet video about suffering that I recommend.  Karen Kilby was a Teaching Assistant for my first class with George Lindbeck at Yale (21 years ago) and she was a gift to me then.  She thoughtfully suggests that, although I am called to practice courage when my pursuit of what is true and good may result in my suffering or even death, it is the courageous pursuit, not the suffering or death in itself, that is holy.  “What speaks of Christ” in the life of someone like Archbishop Romero is not such a person’s suffering or death in itself, but “the steadfastness of the commitment to love, or justice, or doing the will of the father.”  (I recommend the full 31 minutes, especially for those preparing Holy Week sermons, but, if you absolutely have to, skip to around minute 20.) 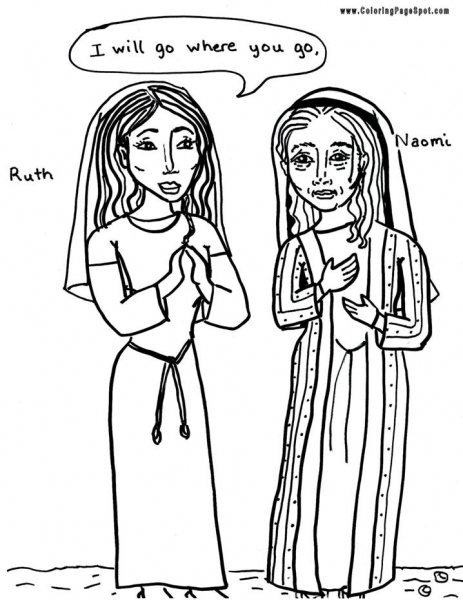 We won’t tell anyone if you print this out and color it.

So, there is my response, for now, to the website’s summons: WHAT WOULD YOU DIE FOR.  I ask a different question to those reading my own little screen:  Who would you look the fool for?  What would you dance in public for?  What has God placed in your life that is so compelling that you cannot but risk the charge of insanity to pursue?  As I have taught many times over the years, Ruth is a very different answer to the violent chaos that closes the book of Judges than the ensuing call for a Royal King in 1 and 2 Samuel.  Ruth courageously and ridiculously refuses to depart from her widowed, childless, grouchy mother-in-law, but she walks with Bitter Naomi, in hope, toward sweet Bet-lehem – toward House of Food.  The story is one that travels around, or maybe underneath, the repetitive agonism of Judges.  (Not incidentally, Ruth’s grandson, David, is at his best when he loses his royal composure, dancing, nakedly in love with God.)  As a friend and former student chided me during a potentially masochistic period of my life, “You seem to have forgotten that God’s covenant with us is meant primarily for our joy!”  I pray for myself, and for my daughters, the unladylike abandon to seek truth and justice and beauty, even when we will suffer shame or worse for it.  After all, realistic about how tough things were and are, I resolutely sang this lullaby to each of them until they were too old to want lullabies.  But I did so always in the hope that all shall be well, and even joyful.