A strange, large metal thing sat on the table next to the powerpoint screen. It looked like a trophy, maybe. “What exactly is this,” I asked an older gentleman in a cowboy hat sitting up front. He looked at me like I am daft. “It’s a trophy.” “Oh, yeah, right,” I nodded. “But, what, exactly is it? Is this some sort of car part?” “It’s a piston.” Ah. Yep. “Are pistons usually this big?”

The dozens of men and two women at last weekend’s Annual Training Seminar in Ministry in Motor Sports were exceedingly kind about my ignorance.  Lucky for me, these guys walk the walk.  Just about all of the sessions had “PATIENCE” as one of the bullet points.

The extent of my experience with motor sports involves:

So, at this event, I wrote little notes to my neighbor, such as, “What is a toader?” (The speaker had actually said “toter,” which, my neighbor explained, is short for motor home toter, or toter truck, a vehicle the speaker uses at some races to set up home-base. There were all sorts of terms I didn’t know for squat, like “flat track,” “local track,” and “Nehemiah.” (Ok, Nehemiah is a book in the Bible, but I had not heard a sermon on it, like, ever.) The seminar was held at a modest hotel with adorable retro-car prints on the wall, very near to the Charlotte Motor Speedway. We could hear the cars revving up Saturday afternoon. (Yea, that sound is sort of sexy.) It lasted all weekend, with long, detailed sessions and very short breaks. I took notes as fast as I could scribble, trying to get a baseline of knowledge so I can write a chapter on motor sports ministries for my book on men and faith. 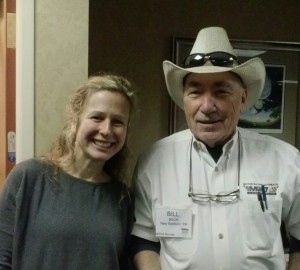 But my biggest note-taking problem was not my glaring ignorance. It was my “gift of tears.” It was hard to stay analytically on-point because I was inspired. These men and women are working from a beautifully odd pattern of ministry. I am sure they have their faults, and recognition of their capacity to go astray is woven into the training. Accountability and transparency to one another and to their loved ones was one of the refrains. There were other refrains that sounded discordant, given the urgent, hyper-managerial forms of counting-success-ministry I hear often. Here are a few.

While “God will open doors,” shed your ideas about notable successes. The Great Commission, as they interpret it, will mean sticking with a community of people for the duration of a season at a raceway, people who are decidedly not there to hear from you. It will mean just being around, visible, tranquil, and attentive enough to earn their trust with daily struggles, be it jealousy, malice, marriage, divorce, alcoholism, financial struggle. People are there to get-their-race-on, not to find Jesus. There is a kind of quest for adrenaline that people in motor sports share. And each of the speakers from the Motor Racing Outreach team exhibited and preached chaplaincy as a kind of antidote, even while it was obvious each of these guys loves racing. They not only talked about the importance of serenity in the mix of a community addicted to speed. They themselves seemed strangely still.

The very gift that a good motor sports chaplain brings to the raceway – the gift of quiet, listening presence in a crisis – can mean that the men they minister to are not keen to acknowledge them later. One of the speakers did an uncanny impression of a guy doing the barely visible dude-nod that says, “Yea, I acknowledge you, but don’t you dare come hug me,” to describe the way some men will react after you have become a true gift of the Holy Spirit in his life. Hugging after a win, or maybe even after a loss, is part of the game. But being obviously friends with a guy who has seen you cry over your wife’s infidelity? That is a different matter. So, don’t expect a guy for whom you have been Jesus-with-skin-on to go around talking-up your weekly chapel service. (In fact, don’t expect most of them even to want a chapel service. One of the speakers was clear that counting chapel attendance is totally wrong-headed.)

Many of the competitors (which, I learned, is a term for the entire racing team) have a tendency “to find their self-worth in racing.” Many of the guys will think “I’m somebody” because of racing. This little fact did not come as a surprise to me. But, my jaw dropped when our speaker said, “Why would we find our self-worth in some silly thing like sports, like in racing cars?” Truly. He called racing cars “silly.” And, while these people take their ministry seriously – fourteen straight hours of butts-in-a-chair taking notes and I am clear on that – they don’t mistake themselves for God. Even with the somewhat crazed-sparkle in their eyes when they talk about racing, they don’t mistake their beloved sport for discipleship. And they seem not to mistake their presence at the track for ushering in the Kingdom. One member of the team told a salient story when, at a big-time champion event, winner after winner thanked Motor Racing Outreach. A guy standing beside him said, “Yea, too bad they aren’t thanking Jesus.” Really? Did he just tell that story on himself? Yep. He did.

There was often language of “investment” (this is Charlotte, after all) but we are not supposed to “invest” in people in order to “leverage them” to reach others. (Young Life-y leadery leaders, are you reading this?) In fact, be aware that “the Enemy” will tempt you to gravitate toward the people behind the wheel (or the handlebars), when you are often called to go out and be with the concession stand workers and the security guards, not because they will in turn witness and spread the word, but just because, guess what? They matter too. I will confess. I expected them to talk about the big MOMENTS OF MINISTRY around the horrible crashes that I know are a part of the story. But they talked about pumping gas, hanging out at the auto parts store, helping put up a tent, consoling someone whose pet had died. One speaker started talking about the movies Gladiator and Remember the Titans, and I was like, “oh, yep, here we go.” (Eye roll.) Meanwhile, after recounting Denzel Washington’s rousing speech for his team to “Hold the Line!” he then said, throwing up his hands, “Guess what? That is not realistic!” When you are in ministry, he explained, you can’t be in it all jazzed up to see results. Otherwise, when you watch men “stall at the cross” (a phrase he attributes to Dale Beaver) you will obsess over what you did wrong. When you see a brother count the cost of discipleship and turn away, you will think you can get it right next time, rather than realizing that it is up to God. We plant seeds, and then, we trust. This allows a good chaplain to be both prepared, with a game plan for each race, but also to be interrupted when someone needs you to go off-script.

I think all of this would have felt off-base if it had been at a big fancy venue with swanky food. But, it wasn’t. It was right off the highway next to the Five Guys Burgers and Fries. And, at that very joint (over truly amazing fries) Bill Beck (who is probably over 60) told me about how Facebook had transformed his ministry (what? really? there goes another stereotype) and several chaplains traded stories of mission work in Mexico. Their combination of creativity and piety really struck me. These are true improvisers, and they seem really, no-joke, to believe more in God’s power than in anything we can do, imagine, dream-up, or market. One story will have to stand in for many others, because I have to save some of this for the book, right? Apparently one woman persuaded her community to travel to each of the 31 states in Mexico and pray at sites representing the heart of each region. “What?” I asked the chaplain telling the story, “Who did she know that gave you all access to all those places?” He smiled. “The Holy Spirit.” I then realized I was working under the assumption that there was some opaque plan by these Americans to do something or other to change something or other in Mexico. Nope. They really, truly just went to pray. Apparently I need to get to the races more often. 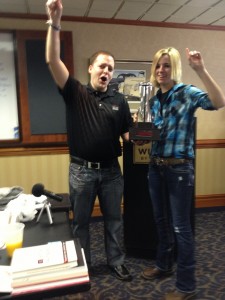 Back to the trophy shaped like a giant piston. (You can’t make this stuff up.) On Saturday night, while I was mindlessly watching a hipster/sexist/romantic comedy (re Judd Apatow) on HBO, the rest of the conference participants went go-carting. The winner was Alyssa Lasater. She evidently trounced the guys. On Sunday morning, before worship, Kyle Froman, from MRO, presented her with the trophy.

She then turned to another MRO team member, who came in second, and said “Good race.” He smirked and said back, “Yea, glad you could dominate me.” She then did a beautiful Tebow, and we cheered.