Corset-of-the-mind; or, Why it is easier for me to say “penis” than appear “Marxist”: a follow-up to the Duke Divinity Women’s Center panel discussion about MEN

One of the most beloved professors in the Yale American Studies Department used to point to the worn elbows of his tweed jacket and say “It is one thing to wear old tweed!  But be sure not to become one of those scholars with tweeds-of-the-mind!”  I tried to draw on his (much quoted) phrase in a faculty meeting, to explain my concern about how the theological academy can warp women’s brains and stunt our scholarship.  We can become so determined to prove to our pious students that we really, really love Jesus; that we really, really are orthodox, it is like we “tie our brain up in a corset,” I said.  The room was full of men, and they seemed baffled by my comment.  Later, a male friend explained that many of them were probably too distracted by mental images of corsets to get my point.  Sigh.

I think I was beset by the evangelical “corset effect” last week during a Duke Women’s Center discussion on masculinity.  The discussion will evidently be available online soon, and I hope this can stand as a substantial epigraph to that posting.

First, some backstory.  Years ago, when I started teaching on sex and gender at Duke, I took advice from some of the guys in the Mennonite Mafia in the doctoral program at the time and assigned the book Fight Club.  A really important passage in that book involves a penis (not symbolically, but quite literally) and, when it came time to talk about the book in class, I was unable to say the word.  It was crazy.  When Peggy Hill (life-partner of King of the Hill) has to teach sex-ed in the Arlen, Texas middle-school, she is similarly tongue-tied, which gives me some solace.  A few students found my incapacity so hilarious that, at the end of the semester, they gave me a quilt with the word “penis” pinned to it.

I told a shortened version of this to the large group at the Women’s Center event last week, and some of the students frowned.  I think I troubled some of them by saying the word, once.  My capacity to know my audience, so to speak, is not always a gift.  If I foresee frowning, and it has been a hard week, I may steer clear of topics that will offend.  It therefore does not surprise me that, soon after seeing a few frowns, I paraphrased the Summa Theologia, by Thomas Aquinas – on the virtues, no less.  When men at DDS are looking at you with a frown, quote Thomas!  (Or Augustine, or Wesley, or MacIntyre, etc.) 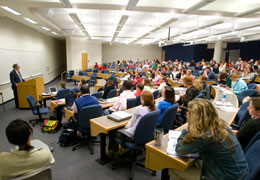 You should still read Aquinas on the virtues (it’s in the First Part of the Second Part of the Summa), but not because I said so in this room.

Besides body parts, certain cultural references, sources, and styles of analysis are also tricky in the evangelical world.  This article helped me so much to understand some of my current students, and what makes them frown.   Here is a useful quote:

Thus, for this group of young, Christian-college twenty-somethings, charity work is good, but political work is iffy. Protesting against contemporary slavery is honorable, but protesting against discriminatory hiring prejudices might take things too far. Non-objective art is beautiful; feminist art is discomforting. Talking about community is commendable; talking about alternative economic systems is extreme. We, like Goldilocks, are uncomfortable with the “too hot” (The Guardian) or “too cold” (Focus on the Family)—we like our porridge “just right” (the BBC).

Which is all to say, I cannot believe I did not give a better, Marxist reading of the ways that some white, evangelical men’s ministries take Judd Apatow’s movies as indicative of THE PROBLEM facing twenty and thirty-something young white men.  The only excuse I have is that somewhere, in the back of my brain, I know that it is more repulsive in some evangelical circles for a woman to sound Marxist than to say the word penis.  As the quote above names, it is important to stay within that goldilocks zone, and giving a clear, class analysis of American culture is “too hot.”

So, here is my un-corseted comment on the currently popular idea among some talking, evangelical heads that young, white men need just to get off the video games, and get to work.  I call bull-poop on that.  More precisely, I want to ask:  Which work?  For whom?   Ok, I do get that there are some trustifarians hanging around outside Malaprop’s in Asheville who could use their creativity in more, well . . . truly creative ways, but the idea that THE PROBLEM facing young men today is SLOTH is a very convenient narrative for the Godzilla Rich.  It tells a story about individual men who need an individual savior to help them rectify their individual sins, so they can make up their mind and get to work!   (God basically stands in for the type-A, get-to-work girlfriend in Apatow movies.)  It distracts Christians who care about ministry for men from the fact that we are living through the Second Great Depression and that there are structural forces of evil at work that treat human beings like cogs in the wheel and widgets in an assembly line.  The “Get to Work, Men!” ditty sung by guys like Mark Driscoll keeps our minds off these facts:  1) there are very few jobs to be had, 2) the few available service-sector jobs often require obeisance to thoroughly emasculating (dehumanizing) policies, and 3) the few available trade jobs require not only obeisance but also, often, a willingness to work in places that strategically ignore the most basic safety standards set for their industry.

For more reading on this, please consider these links, and maybe the movie Compliance (even though, apparently, sadly, the guy who made that movie thought he needed a strip-tease with a cute blonde to get what I think was supposed to be a pro-labor point across).   As an aside, I should note that this is the white boy version of the boot camp narrative for African-American men.  Whereas young, white men are depicted as feckless, young black men are depicted as violent.  So, one very popular, evangelical answer for young, black men is some form of boot camp, which is tragically useful for military recruiters and similarly lacking in a structural analysis of systemic evil.  This lack is obvious in this smash-hit story about one mother’s singular commitment to help save her son, by way of re-education at boot camp.  (A mother’s dedication, boot camp, plus bit of Jesus will get an African-American man a Rhodes Scholarship, evidently.)

There is much that breaks my heart about all of this mess, and not just the fact that I failed to say it in Westbrook 0016 at DDS.  Part of what breaks my heart is that both neo-liberal white and evangelical white thought-makers add on another layer of analysis that makes women the problem.  So, the story goes like this:  Young white men are sitting around playing video games rather than working.  They lack initiative.  They need to get back to work.  We need to dig into the cause of their malaise (but not so deeply that it implicates the Godzilla Rich) so, we will blame the women who raised them and/or the women who will or won’t date them.  Their mothers coddled them.  Their mothers bullied them.  Their mothers worked.  Their mothers helicoptered.  Their girlfriends demand too much of them.  Their girlfriends demand too little of them.  The women who should be dating them are too busy with their own selfish lives to take the time to love on them, or to push them, or to give them the requisite morning blow-job (thank you, Mark Driscoll).  Blah, blah, blahdy blah blah.  And, double-sadly, neo-liberal feminists like those at double-x spend their brilliant brain-power trying to sort out just which of these gender-tension diagnoses makes the most sense.  I think most of the analysis is based on a false premise to begin with:  that is, that the problem facing young men these days is a lack of gumption, rather than a lack of 1) jobs and, 2) jobs that allow men to maintain their dignity and, 3) jobs wherein they can safely blow a whistle if they know what they are doing is wrong and/or dangerous, to themselves or to others.

I do not have a good Jesus-y word to end this post, except that I think Marx stole his best ideas from Jesus.

And, I think Alasdair MacIntyre wrote a book on that once.