Why I Support “Family Planning”

Editor’s note:  Yesterday, the New Evangelical Partnership for the Common Good released a statement entitled  ‘A Call to Christian Common Ground on Family Planning, and Maternal, and Children’s Health.’  The NEP document defines family planning as ‘the freely and mutually chosen use of a variety of contraceptive methods to prevent or postpone pregnancy.  It does not include interventions that take place after pregnancy is established.’ (p. 5)  Professor Hall was a signatory to this statement, and we hope that you will click over to read it as well as her comments here.

When Richard Cizik of the New Evangelical Partnership for the Common Good wrote to ask if I would sign this document, I agreed.

I knew that I would need to explain myself to some beloved friends.  Of course, I also have other beloved friends who are sad that I still even have friends who do not support family planning.  Friendship is complicated.  But the NEP press release is out, so here goes my explanation.

First, some rather long caveats about the premise of statements on global, family issues.  I am basically persuaded at this point that top-down, from outside efforts on the part of Westerners to tell variously “other” people how to think about sex and gender are almost always messed up.  Here I include the “look at the cool celebrity woman – with a name – supporting this unnamed brown, brave, struggling woman” a la this recent magazine ad for Half the Sky. 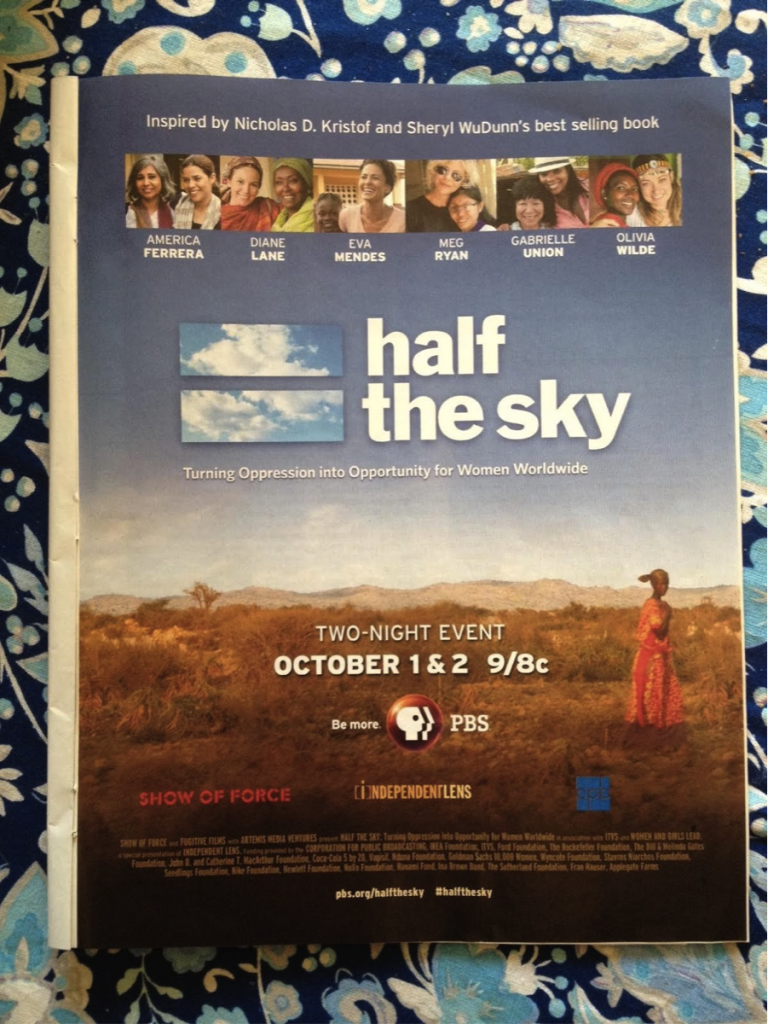 I am not keen on American grand strategies, even those ostensibly for gender justice.  A book you might consider specifically regarding the geo-theo-politics of defining non-Western families and the battle over contraception is called Fatal Misconceptions.  You can read more here. And, while we are at it, I would suggest that, as you think on the ways that women’s vaginas have been globally policed, you also think about which penises are routinely named as “the problem” by reading Emmanuel Katongole’s diagnosis of the “condomization of Africa.”  (I wrote a little about that here [‘Whose Progress? The Language of Global Health’])  Please do know I am not crazy enough to romanticize female, genital mutilation, or to equate it with salon waxing, or to sentimentalize the on-the-ground, sexually violent tragedies of global poverty.  I am persuaded, however, that even neo-liberal Western feminism can really make a mess when we fly somewhere with a five-year plan, rather than sitting still, listening, in one place, for five years, getting a clue about how much we do not know.

So, I am not signing on to this NEP document to engage in the war over who decides what should happen regarding sex, penises, or vaginas over there, wherever the currently trendy over there is at the moment.  There is plenty of reason to sign if you stay right here in the U.S., and if I stay right here in the little circle of mess that is American Christianity.

First, let’s take the convenient truthfulness of dear Todd Akin.  He was just saying out loud what, sadly, some pro-life women and men think.  It might help to consider a formally similar story.  Conservative Party whip in the UK, Andrew Mitchell recently lost his composure and spoke from his gut, calling a group of police officers who were blocking his way “f—ing plebs.”  In case the fact that people still call one another “Lord” and “Lady” and such did not clue you in that England still functions as an aristocracy, Mitchell’s candor should clear things up.  And, here, with Todd Akin, another public figure, he spoke emotionally, from the gut, about rape, sex, and pregnancy, revealing something about sexual politics in American Christianity.

Sadly, many feminist commentators struggled with all of this, wondering about the existence of a pro-life rape exception to begin with.  If you believe a life is a life is a life, then how can you make an exception for rape? In this way, Todd Akin seems like the most consistent pro-life voice, willing to speak a truly pro-life witness.  But, in order to maintain his consistency, he had managed a bit of moral jujitsu, believing that a woman who really, really didn’t want what she was getting could not get pregnant.  If you sort this all out, a very ugly little truth within the pro-life movement emerges.  Some – not all, please hear me – some within the pro-life movement want to keep sex and pregnancy absolutely tied together because they consider babies to be the price women should pay for sex.  If sex becomes disconnected from procreation, then we could end up with women engaging in —- free love.  In the minds of some (not all, but some) pro-life advocates, contraception destroys the world by allowing women to have orgasms without paying for them.  I do believe that some pro-life Christians think that there should be an abortion exemption for rape because they believe compassion or even justice requires such an exemption.  But, some pro-life Christians accept the exemption because a rape survivor didn’t actually choose to have sex and therefore should not have to pay the usual price.

If you think that maybe, maybe, someone you love (including yourself) has this wicked thought going through his or her (or your) head, thanks to subtle cultural cues or a cruel wielding of the worst that Saint Augustine has to offer, I can suggest no better than this little piece (Rowan Williams, ‘The Body’s Grace’).  I would offer something even more erotically celebratory, but, if you have some version of sex = shame in your brain, starting with Rowan Williams is probably good.  (Here I cannot help but quote Stanley Hauerwas quoting Butch Hancock on this mess:  Life in Lubbock, Texas, taught me two things: One is that God loves you and you’re going to burn in hell. The other is that sex is the most awful, filthy thing on earth and you should save it for someone you love.)

But there is a related reason that I need to state, unequivocally, that women should have affordable, reliable access to birth control.  That is because I have come to realize that too many smart, pro-life men are not just neutral on the issue of gender equality, they are passive-aggressively hostile to it.  I had this heartbreaking realization over a decade ago, when I arrived at an institution with some vocal pro-life, pro-child people running around, and the darned place didn’t even have a high-chair in the common room, or changing tables in the bathroom.  When some of us tried to make space for a childcare co-op, we were told it was a legal risk.  When we found out that the law school had such a space, we still hit a brick wall.  Through a combination of sneakiness and begging, there is now a little closet, cozy, but small, that marks an iota of hospitality in the building.  I count it a miracle.  But what the mess taught me is that droning on about the “gift of every life” (blah blah blah) is all well and good, but structures have to change to accommodate children, or else we just need to admit that we only want infertile women, celibate women, and men in the working institutions we are a part of.  So, yes, I cannot blame my female students and the men who love them for wanting some good family planning.  This is just to name some simple, basic, logistics regarding one institution.  I would recommend reckoning also with the findings of this recent document on how, even though women have made real strides in workplaces throughout North Carolina, we still make significantly less than men for doing the same jobs.  And one in five women in NC lives in poverty, with some of our supposedly Christian leaders intent even to cut the unquestionable blessing that is Head Start.

So, for reasons related to what Rowan Williams called “the body’s grace,” I think that sex and procreation can be separated without bringing evil into the world.  And, also, I am clear that women have way, way too few real, male, feminist allies in the pro-life movement.  And so I signed the NEP document.

Finally, another little story ticked me off that has been reverberating in my brain for a few years.  Paul Lauritzen wrote a 2000 Commonweal article on a (yes, still) beloved colleague, Gilbert Meilaender, with whom I have long argued over homosexuality. (Lauritzen quotes me in the piece regarding such arguments.) But Lauritzen also related one story to show just how “tough” Meilaender can be with his gender politics:

Take, for instance, the letter he [Meilaender] wrote to First Things in February 2003, objecting to an essay in the magazine, ‘Fatherhood, 2002,’ by Damon Linker, at that time the magazine’s associate editor. The essay, Linker explained to me in an e-mail, ‘was about the experience of becoming a father, and offered what I thought was a modest defense of the modern, egalitarian family in which mothers and fathers shared the trials and rewards of caring for young children.’  Some First Things readers responded with dismay, writing letters accusing Linker of undermining traditional gender roles in the family.  Given that Linker’s piece was a reflection on parenthood inspired by a new father’s experience of caring for an infant, the tone of the responses was surprisingly harsh. Among the more caustic letters was one from Meilaender. In a comment that might generously be described as lacking collegiality, Meilaender remarked that he ‘detected a slight whiff of regret at [Linker’s] own inability to lactate, a sad biological fact that should concern those gnostic enough to think simply in terms of ‘parenting.’

So, yes, I already knew that men mocked other men for being pussy-whipped, and hen-pecked, and such, and I know that we are supposed to laugh uproariously at the silly/scary CIA grandpa in that Fokkers movie who wants to feed his grandbaby with a supplemental feeder (bwah, ha, ha, silly Grandpa, tits are for girls) but, this episode constitutes a kind of workplace bullying through shame that plays on the female “ick” factor.  My friend Gil, and it seems perhaps other men at this leading journal of all things excellent, academic, and Christian, used gendered shame to mock a dad trying to form a non-patriarchal family.  You can read the entire letter here.

Given that there are so few pro-life, truly feminist men even in my little corner of the supposedly one-third world, and, given that it seems men who even try to advocate for egalitarian parenting are open to public mockery, I don’t know how a Christian feminist is able in clear conscience to advocate against family planning.  For myself, I am signing on to support women who bring their babies to class and those who are having “too much” non-procreative sex with their husbands, those who are loving their time with their little ones at home and those who have managed to cobble together childcare in a crazy, anti-child market.  And I hope that this new NEP document brings people back around to consider the inconvenient but real gift of each life.  Because, crazy as it sounds, God help me, I still stand also by this (For Shame? Why Christians should welcome, rather than stigmatize, unwed mothers and their children).