I heard this piece on NPR this weekend, and I nearly had to pull off the highway and hula hoop. Here is a quote: “Volunteers, by their very nature, are an upbeat crowd. That includes a group of a dozen volunteers who came to Tyler Elementary School in Washington, D.C., Friday to organize the school library. The library was kind of a mess, and the kids couldn’t check out books. There’s no librarian here because of school budget cuts.” 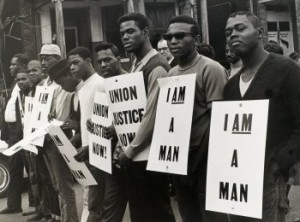 “I find myself one day in the world, and I acknowledge one right for myself: the right to demand human behavior from the other.” – Frantz Fanon

Why would I grouse about some friendly people spending their day organizing an underfunded library?  Because, volunteerism in the public school system is turning nice church ladies like me into scabs.  “Scab” is union slang for someone who works while her brothers and sisters are taking the sacrifice to strike for better (or these days maintained) pay.  In this case, I am using the term loosely to make a point.  During a time of drastic cut-backs in what were already woefully underfunded school budgets, PTA moms can and should use our moxie to organize for a better education budget.  The default game-plan in Durham is to fill the holes of public education with well-intentioned, fairly well-off women, and Duke undergraduates, who are not trained, and who are kindly, sometimes daily, working for nothing – taking up a position that someone used to do for a salary and benefits.

The NPR piece notes that George Bush the First advocated the “thousand points of light” idea – the idea that real people in real neighborhoods doing bits of good was a better strategy for dealing with what are usually called “social problems” than more funding for “social programs.”  It traveled over to the U.K. recently, where churches and local charities were asked to fill in for cuts to basic services (all while duly appreciating the princess’s new frock, of course).

At our best, volunteerism or what we call in the university system “service learning,” can lead to uncomfortable conversations about how budget-cuts are shaping the lived realities of people who work for a living in the school system, or in construction, or whatever.  And, in the mix of the awkwardness, a Duke undergrad, or a busy Junior League mom (also mentioned in the NPR piece) might decide to get more involved in her neighborhood association, and to find out how that (often rag-tag) group could organize together for a better system, one that benefits working people over the long haul.

This is my own little prayer on MLK weekend, and my prayer has a history.  (Bear with me here.)  On boring road trips with my family growing up, there were a few mainstays, chosen by my father.  (My mom shuttled us around town to the Pointer Sisters.  Dad usually chose the long trip music.)  After listening to Chet Atkins, after the first stop at Dairy Queen, my Dad would put on the Alice’s Restaurant tape.    (If you have not heard it, for goodness sakes do!  And set aside a bit of time . . . ) And, after another potty break, we would listen to Tom Lehrer.  This (short) ditty seems particularly relevant this weekend.  It seems to me like MLK weekend becomes something just about as cheesy, and useless, when it is made into a call to “volunteer!”

And, while my take on things may seem cynical to some readers, and a sure sign that I need to eat more dark chocolate, I am going pro-actively to object, and counter that the National Day of Service is cynical.  It is cynical to substitute charity for solidarity.  It is cynical to pretend that Martin Luther King, Jr. was assassinated because he asked people to organize library books alongside one another once a week.  His movement asked people to hear and heed the call of such small, daily interactions and then work alongside one another for structural, social change.    His movement did believe it possible, with organized effort, for the grace of a weekly, ritualized micro-miracle to spill-over into a larger, stranger one.  A story I have in my head is of a Memphis housewife who waved thanks every week to the men who picked up her trash, and who, when the sanitation strike started, took off her apron and went downtown to wave to them again, rather than call and complain about the mess in her alley. And, seeing their courage, she was inspired to bring up the matter with her friends over sweet tea . . .

Volunteerism may make some people feel good.  The NPR piece suggested as much.  As it happens, I heard it on my way to a community organizing meeting at a union hall west of here.  Besides my phone direction system randomly sending me down a dirt road to a cow-pasture first (ugh), it was a good trip.  Sitting awkwardly together with people I don’t yet know, thinking about how to discover, together, the courage and time to bend our home-state toward justice, when the designated leaders of the state seem to be surfing a different arc altogether . . . well, THAT made me feel good.  And it sent me back to my own neighborhood association pot-luck with a hopeful, mischievous gleam in my eye.

On the way home, I skipped NPR, and listened to this song about 20 times.  I promised a friend that, for every grisly piece of news I send him, I would also send him something clearly, unambiguously hopeful.  I sent this song to him, and I now share it for your dancing pleasure.  (Jenny Graves put it on a disc for me a while back – so thanks go out to Jenny!)  Enjoy!

From: Church, Ethics, Organizing and activism